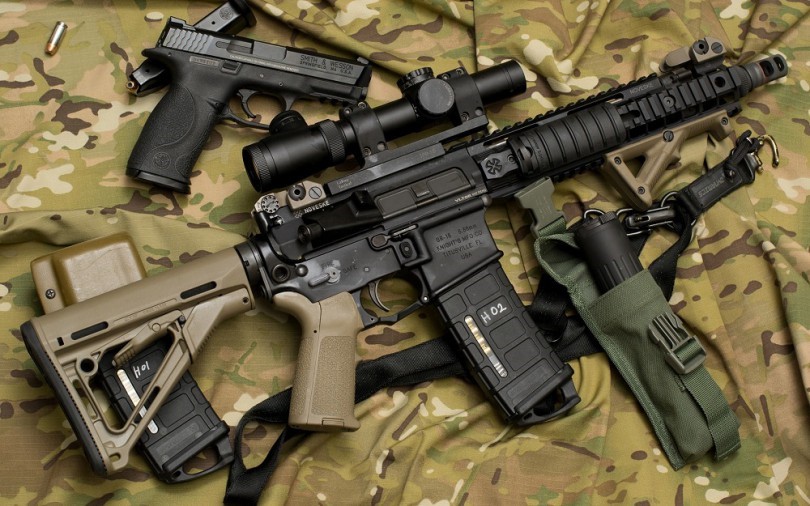 I’m not just a gun owner, I’m a firearms enthusiast and an NRA member, and I’m willing to have an open discussion about gun ownership in the US. I am so sick of these mass killings.

On the major news websites and TV shows, as well as my social media feeds, there’s a loud cry for gun control in the wake of the Orlando massacre. My default position on this issue has always been to view those calling for bans on guns as well-intentioned people adopting a misguided solution because it feels like the right thing to do. However, many of the people I see getting behind this idea of banning “assault rifles” (I’ll set aside my issues with this term for now) are people I respect. So I’m no longer willing to dismiss the idea out of hand. Rather, I want to try and understand where this idea is coming from and examine for myself if it’s a valid solution worth considering.

Why do so many people think that banning assault rifles is a legitimate way to stop or reduce these kinds of events? Setting aside the more extremist views on banning guns, the reasonable arguments I’ve been hearing seem to share at least one common thread; a notion that if the Orlando killer would not have been able to procure an assault rifle, he would not have been able to kill so many people. The idea is that if a killer is hellbent on shooting up a place, but all he has access to are handguns rather than assault rifles, he would not be able to take as many lives prior to police intervention. I’ll be honest, this strikes me as a fair and valid argument.

From my perspective, having fired many handguns and assault rifles, including in shooting competitions, the argument does bear further consideration. So with the goal of a looking for the truth, not what feels right, let’s work through whether or not a ban on assault rifles would truly have that intended outcome. Because if it would, I’d be willing to get behind it.

First off, we need to keep in mind that the kind of fully automatic machine guns you see in the movies—where the gun keeps spraying bullets at a rate of hundreds of rounds per minute—are already illegal in the US. This is not the kind of gun used in Orlando. The kind of gun the Orlando terrorist used is the kind a civilian can legally obtain in the US today, which is classified as a semi-automatic weapon. This means the gun will discharge one bullet each time you pull the trigger. In other words, if you want to shoot three rounds really quickly, you need to pull the trigger three times really quickly.

With that in mind, let’s take a look at the issues surrounding the argument that a shooter who did not have access to an assault rifle and only used a handgun would not have been able to take so many lives during the incident before the police intervened. There are three major differences between a handgun and a legal assault rifle that we need to look at to determine if this idea is valid.

Handguns are semi-automatic, just like legal assault rifles. One pull of the trigger fires one bullet. So the rate of fire between a handgun and a legal assault rifle are identical: they each shoot as fast and as many times as the trigger is pulled. Which means a mass shooter can effectively discharge the same amount of bullets in the same amount of time no matter which type of gun is used.

There is a bigger difference between these two types of guns in the number of bullets that can be fired without needing to reload. A typical assault rifle magazine holds 30 rounds, whereas a typical handgun magazine holds between 8 and 16 rounds, depending on the model. So while an assault rifle could fire 60 bullets with only one reload, a handgun might take three reloads to fire the same number of bullets. That’s a valid difference. However, because of my personal experience having to reload guns while shooting during competitions, there are two reasons I consider weapon capacity to be a non-factor here:

Bottom line: a mass shooter can fire just as many bullets with a handgun as an assault rifle.

The area of ballistics refers to the type, speed, and power of the ammunition used. This is an area with a whole lot of variables because there are a whole lot of different calibers and types of bullets.

So the question becomes: In these mass shooting situations how big a factor are distance and defensive layers? Sadly, mostly what we see in these horrific situations are close range (less than 5 meters) killings of unprotected victims.  Which means a shooter could do just as much damage with a handgun as an assault rifle.

Does It Add Up?

When you consider the above firearm facts, I just don’t see how a ban on assault rifles would have prevented or even lessened the damage in Orlando. Nor in San Bernardino, Chattanooga, Fort Hood, Aurora, Sandy Hook, the Navy Yards of Washington DC, the church in Charleston, or most any other mass shooting we’ve heard about. (And I won’t even get into all the horrific murders committed by terrorists without the use of a single gun, including 9/11, the Boston bombing, and Timothy McVeigh.)  This brings me full circle back at my original belief that banning currently legal assault weapons is not a valid solution to the issue of mass shootings.

Anyone legitimately interested in going beyond the political rhetoric, and beyond their emotions, to learn the truth about guns can find out this information for themselves.  Which begs the question: if banning assault rifles would not make any significant difference in preventing mass shootings, why are so many people rabidly supporting it?   Here I’m going to choose to give them the benefit of the doubt and assume they are widely under-informed on the facts about firearms and, in their ignorance, supporting the answer that feels right to them. Any other reason to support this kind of ban would be willfully irresponsible at best, and at worst condone the disarming of law-abiding citizens by oppressive governments.

The Other Side of the Issue

Criminals and terrorists regularly and routinely use illegally obtained guns to kill people. It’s a sad state of affairs, but the reality is that there are people in this world willing to break whatever laws we care to pass in furtherance of their violent agenda. So I think we need to ask ourselves a very serious question.  In a world where criminals and terrorists can and do obtain guns illegally, what is the net result of passing a law banning assault rifles?  Would it truly keep dangerous weapons out of the hands of dangerous people?  Or would it leave law-abiding citizens defenseless and vulnerable?  And if the answer is “a little of each”, we need to think through those ramifications very carefully.

Case in point, the North Hollywood shootout in 1997. Criminals armed with illegally obtained assault rifles and body armor robbed a bank and then engaged the Los Angeles Police in a shootout. Because the shooters had assault weapons and the police (at the time) were only allowed to carry handguns, the shooters were able to keep the firefight at a much further distance, outgunning the police. The police ended up having to retreat to a nearby private gun store and requisition assault rifles in order to engage and stop the shooters.

Would passing laws banning assault rifles make it harder for criminals to acquire them? Yes. But here’s the problem.  It would not make it impossible.  And therein lies a good answer to the question that is being asked a lot right now, “Why does anyone need an assault rifle?” Law-abiding citizens need the option to own assault rifles because criminals and terrorists have them.

By the way, the other really good answer to that question is Hitler, Stalin, Pol Pot, Hussein, et al.  Some may want to dismiss it as far-fetched or unrealistic.  But the sobering facts of recent human history include tyrannical leaders of murderous regimes, including in China, Japan, Cuba, preying on a disarmed citizenry and killing tens of millions of people.

“The most foolish mistake we could possibly make would be to allow the subjugated races to possess arms. History shows that all conquerors who have allowed their subjugated races to carry arms have prepared their own downfall by so doing.” —Adolph Hitler

This brings to mind that old adage, “Those who fail to learn from history are doomed to repeat it”.

The only proper way to ban guns is if we come up with some high-tech beam of energy that simultaneously melts every last gun on Earth—those of criminals, terrorists, governments and law-abiding citizens alike.  That would give humanity a level, fair, gun-free playing field.  Of course, once that’s done we’d need to use that same weapon to melt down all the knives, bombs, hand grenades and other devious ways our fallen race has devised to kill each other.