Reading all the news stories about this lunatic’s past run-ins with the law, it’s obvious he has some serious mental health issues. This is a man who should have had his guns taken away. And he did, the gun laws worked. The state of Illinois confiscated his guns but could not legally retain custody of them so they gave them to his father. And, unfortunately, the father gave them back to his crazy son. So we’re left with another tragic, real-world example of why gun laws cannot be relied on to solve this problem.

The loud cries for more gun control after shootings like this seem to carry with them an unreasonable expectation of efficacy. The tacit implication is that if we just had enough gun laws, these mass shootings could be prevented. A society completely free of gun violence is a noble goal to work toward; it’s good and right that we should try to head in that direction. But it’s completely unrealistic to expect that we will ever get to 0% gun violence in America, much less that gun laws alone will bring it about.

Are gun laws necessary? Absolutely. But we need to accept that they have a limited scope; laws can influence behavior to a great degree, but they cannot control it.

So are gun laws necessary? Absolutely. But we need to accept that they have a limited scope; laws can influence behavior to a great degree, but they cannot control it. We can and should try to fashion reasonable gun laws that will help influence behavior. At the same time, we need to recognize that there will always be a human element to be accounted for; whether it’s stupidity, like the dad who gave his crazy son his guns back, or evil, like criminals and terrorists who don’t care who gets hurt, or insanity, like the Waffle House shooter who stood there buck naked shooting a restaurant full of innocent people.

In the real world, gun laws cannot keep guns out of the wrong hands 100% of the time. In that horrific moment when circumstances have allowed a gun to fall into the wrong person’s hands, and the shooter is standing in a crowded room full of innocent people with a loaded weapon and homicidal intentions, gun laws are utterly useless. Society in that scenario is ruled by an entirely different law: survival of the fittest. 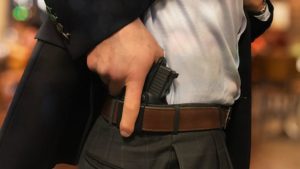 This is why I am opposed to sweeping gun laws that penalize law-abiding citizens and undermine their ability to protect themselves and their families.  And it’s also why I am a proponent of concealed carry. Citizens like me who took training classes, passed a background check, have no history of mental illness, and met proficiency standards with a weapon should not only be allowed to carry a gun, they should be encouraged to do so.

It’s tempting to dismiss it as a cliché, but in a do-or-die scenario, the old adage remains true: the best option for stopping a bad guy with a gun is a good guy with a gun. Of course, the Waffle House incident proves it’s not the only option, thanks to the heroic efforts of James Shaw, Jr. But his bravery doesn’t disprove the general rule. If I was in Mr. Shaw’s position and my options were to fight off an armed lunatic with my bare hands or with my .45, I would choose the gun every time. In an ideal situation, of course, the good guy with a gun would be a trained, professional law enforcement officer.  But in real life, it’s rarely the case that the police are able to intervene in an active shooter situation in time.

That said, armed citizens with concealed carry permits are not the ultimate answer to this problem any more than reasonable gun laws are. Both are necessary elements of an effective solution, but neither will solve the problem. Ultimately what’s needed in this nation is a heart change. Throughout it’s history America has been a nation of gun owners, yet these mass shootings are a relatively new phenomenon. So what’s changed?  The biggest difference in modern America is our values as a society. We’re becoming a secular, progressive country where moral virtue is no longer valued and life is no longer considered sacred. No longer are honor, dignity, and self-sacrifice considered dominant American virtues. They’re being replaced by tolerance, moral relativism, and celebrity of self. Within such a culture is it surprising that rampant violence has become a viable option for the evil, lost and disturbed among us? 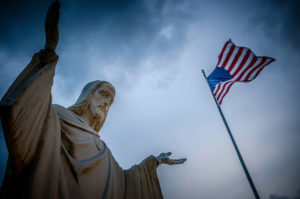 For 60 years, America has been slowly rebelling against the idea that there is an objective right and wrong, an objective truth. We’ve been pushing God into the margins of society. Nowadays we’re much more comfortable with ideas like “what’s true for you isn’t true for me” and “all roads lead to God”. This is the logical outworking of a foundational shift of belief in this country.  America was founded on the conviction that the ultimate source of all our rights and duties is God, that we are endowed by our Creator with certain unalienable rights, and that, as a nation, we should rely on the protection of divine Providence.  To our founding fathers, faith and virtue were two corners of the golden triangle of freedom, two attributes necessary for our nation to remain free.

But that was way back in the olden days before modern science enlightened us, right? Prior to even 1950, we didn’t have civil rights or the Internet or even cell phone video.  Well, we also didn’t have mass shootings.  Don’t get me wrong; I am very much in support of science, civil rights, and cell phones. But those things do not come at the expense of God. (In fact, they are only possible because of God, but I’ll save that argument for another time.) It’s no coincidence that as America becomes increasingly steeped in a secular, naturalistic worldview, we are becoming more violent. We used to have prayer and Bible readings in public school, which helped teach our young citizens about virtue, right and wrong, and the truth that there is something out there bigger than themselves. But God is no longer welcome in our schools. Instead, our young citizens are now fed a steady diet of secularism, materialism, and the broken theory of evolution, on which the scientific community still has not reached a consensus, by the way.

Think about the implications of the idea that human beings randomly evolved from a primordial soup through a mindless, unguided process of chance plus time. If that’s true then human life has no ultimate value and there can be no such thing as human dignity; we’re all just grown-up bacteria; molecules in motion. And further, if there is no God who acts as the standard of morality and reigns as Supreme Judge, there is really no such thing as right or wrong.

These are the inescapable conclusions of the naturalistic worldview that our kids are being taught. Add to that the fact that mass shootings are a proven way to instantly achieve international fame in our celebrity-obsessed world, and the fact that people are now less likely to report someone showing unusual behavior for fear of being labeled intolerant, and you start to get a sense of the existential mess in which these mass shooters are living. Given that cultural milieu, what’s to stop a few angry, evil or disturbed people from deciding to make a big statement by killing a bunch of other grown-up bacteria?

Without God, it all falls apart. There is no way to sustain freedom, peace, justice or hope short of Him. Our ultimate hope is only found in God, through His Son, Jesus, who came to save us, so that we may have life.

“I have told you these things so that in Me you may have peace. You will have suffering in this world. Be courageous! I have conquered the world.”
—John 16:33

0 thoughts on “An Existential Conundrum”