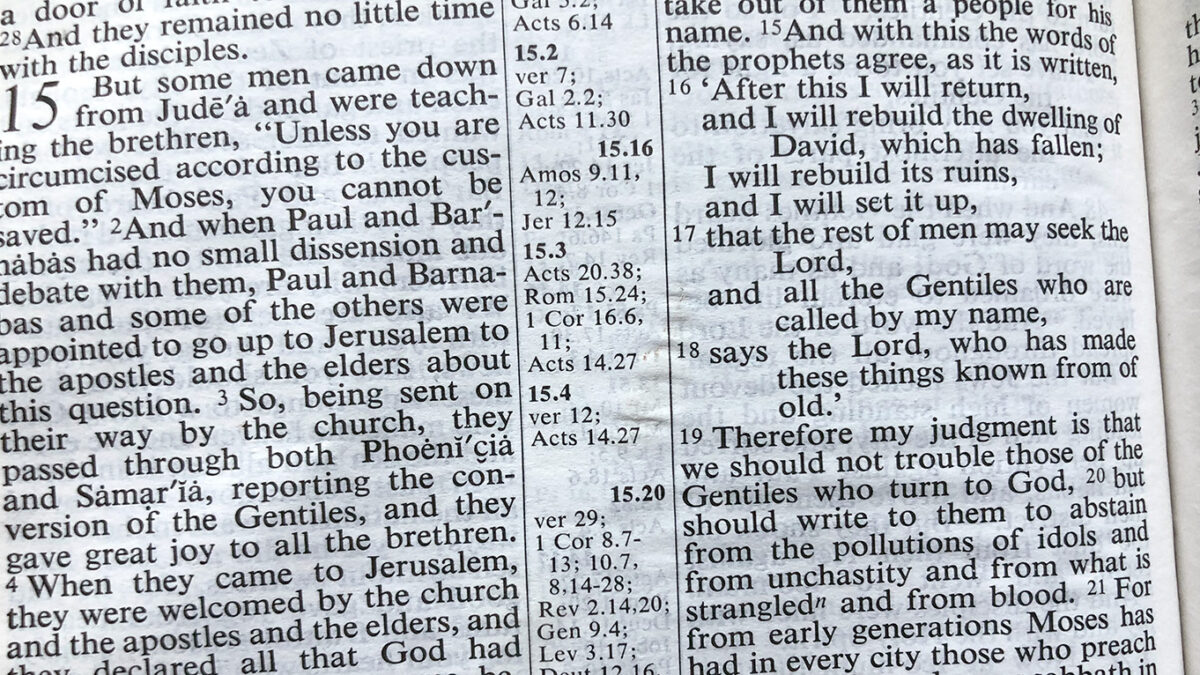 The Jerusalem Council (Acts 15:1-29) speaks directly to the relationship of Gentile believers and the Law of Moses. But does it also offer insights on the relationship between that Law and Jewish believers in Jesus? In his article, Was Paul Championing a New Freedom from—or End to—Jewish Law?, Dr. David Rudolph, a Jewish believer in Jesus, holds that Paul “regarded Jewish identity and law observance as a matter of calling and covenant fidelity.” And further that Paul “lived as a Torah-observant Jew and taught fellow Jews to remain faithful to Israel’s law and custom.” Rudolph’s conclusions introduce an interesting line of thought. Are there two laws—or at least two sets of obligations—on the Christian: one for the Gentile and one for the Jew? Are Gentiles to keep the commandments of Christ, while Jews are expected to keep both the Law of Moses and the commandments of Christ? An examination of Acts 15 offers some insight into these questions.

A Matter of Salvation

The Jerusalem Council passage begins with a question about salvation. “But some men came down from Judea and were teaching the brothers, ‘Unless you are circumcised according to the custom of Moses, you cannot be saved’” (Acts 15:1, ESV). Concerning that teaching, “Paul and Barnabas had no small dissension and debate with them” (v. 2). So they headed to Jerusalem to discuss the matter among other apostles and church elders. Once gathered “some believers who belonged to the party of the Pharisees rose up and said, ‘It is necessary to circumcise them and to order them to keep the law of Moses’” (v. 5). Carrying forward the nature of the initial debate in verse 1, we can interpret the phrase “it is necessary” here in verse 5 as related to salvation. In other words, the question put before the council was, “Is it necessary to circumcise the Gentiles and require them to keep the law of Moses in order for them to be saved?”

This matter was then considered by the apostles and elders (v. 6), “and after there had been much debate, Peter stood up” (v. 7) and addressed the council. He related his own experience in sharing the Gospel with the Gentiles. In an apparent reference to the story of Cornelius (from Acts 10), Peter explained that God “bore witness to [the Gentiles] by giving them the Holy Spirit just as he did to us [Jews], and he made no distinction between us and them, having cleansed their hearts by faith” (vv. 8-9). In other words, God brought salvation to Gentiles who were not circumcised and did not keep the Law of Moses. They were saved by faith, not by keeping the commandments.

Peter continued his argument, saying, “therefore, why are you putting God to the test by placing a yoke on the neck of the disciples that neither our fathers nor we have been able to bear?” (“Disciplines” here presumably refers to the Gentile believers who were not keeping C+ML.) There is a Hebrew concept of a “yoke” as a teaching of a particular rabbi to which a student obligates himself. For example, Jesus said, “Take my yoke upon you, and learn from me, for I am gentle and lowly in heart, and you will find rest for your souls. For my yoke is easy, and my burden is light” (Matt 11:29-30). Thus, we are not obligated to think Peter is using the phrase “yoke” to cast the Law of Moses in a negative light. But he does explicitly state that “neither our fathers nor we have been able to bear” the yoke of the Law.

Peter is referring to his contemporary Jewish brothers and sisters as well as their Jewish ancestors. In other words, all Jews. This sweeping statement brings to mind Romans 3 where Paul, citing Psalm 14:1-3 and Psalm 53:1-3, wrote, “as it is written: ‘None is righteous, no, not one; no one understands; no one seeks for God. All have turned aside; together they have become worthless; no one does good, not even one’” (Rom 3:10-12). Paul goes on to add, “all have sinned and fall short of the glory of God” (Rom 3:23).

Peter then comes to the culmination of his argument: “But we believe that we will be saved through the grace of the Lord Jesus, just as they will” (Acts 15:11).  His statement reveals two details germane to our study. First, Jews and Gentiles are saved in the same way. Second, salvation does not come through keeping C+ML but rather through “the grace of the Lord Jesus.” Peter is echoing teachings found elsewhere in the NT:

For it is by grace you have been saved, through faith—and this is not from yourselves, it is the gift of God—not by works, so that no one can boast.

Next, Barnabas and Paul tell of the signs and wonders they have seen God do through and among the Gentiles (v. 12). They offer evidence supporting Peter’s claim that God is bringing salvation to the Gentiles despite their lack of circumcision or keeping of the Mosaic Law. And then James, the head of the church in Jerusalem, speaks up. He quotes from Amos 9 and Jeremiah 12 to show that God’s calling of the Gentiles was foretold long ago (Acts 15:15-18). And then James issues a decision on the issue:

Therefore, my judgment is that we should not trouble those of the Gentiles who turn to God but should write to them to abstain from the things polluted by idols, and from sexual immorality, and from what has been strangled, and from blood.

In other words, James decided that the Gentiles should not be “troubled” with circumcision and the Mosaic Law as had been debated. Rather, they were to avoid four things. How are we to classify these four restrictions?

Interpreting them as a requirement of salvation would contradict the previous passages in which Peter taught that salvation comes through grace, not works. It would also contradict the passages in which we see God bringing salvation to Gentiles who were not keeping these four restrictions. Instead, they appear to have been given as guidance to the new Gentiles believers regarding how to live out their faith alongside their new Jewish brothers and sisters in Christ. There are two reasons for this interpretation.

First, the perspective of the Council as revealed in Acts 15:1-29 is that faith in Yeshua HaMashiach (Jesus the Jewish Messiah) was a Jewish belief. This was a debate between Jewish Pharisees and the Jewish apostles and elders, which occurred in Jerusalem, the geographical home of the Jewish people. The topic of discussion was what should be required of non-Jews who also want to follow Yeshua. Thus, it can be read as a sort of internal discussion among Jews who met to decide “what do we require of outsiders who want to join our faith”?

Second, James explains that he is giving the four restrictions because “from ancient generations Moses has had in every city those who proclaim him, for he is read every Sabbath in the synagogues” (Acts 15:21). In other words, he links the four restrictions with the widespread presence of Judaism. The point he is trying to make is not neatly explained. However, the interpretation that seems to make the most sense of this passage is that James was pointing out that the Gentile believers, no matter where they are located, are bound to come into contact with Jewish believers. Consider the following:

Let us not make it difficult for the Gentiles who are turning to the Jewish God. Instead, let us offer them a few restrictions to help them keep the peace with their new Jewish brethren, who have been steeped in the Law of Moses for generations. Here are four guidelines that should be sufficient to keep relations agreeable between them.

Additional support for this interpretation can be found in the way these restrictions are introduced in verse 19: “Therefore my judgment is that we should not trouble those of the Gentiles who turn to God.” The phrase “should not trouble” is rendered in other translations as “should not cause difficulties” (CSB) or “should not make it difficult” (NIV). The Greek word is parenochlein (Strong’s 3926) which means “to annoy.” James’ stated motivation of not wanting to trouble (or annoy, or cause difficulty for) the Gentiles lacks the force of a commandment or obligation. It speaks more to a matter of discretion in which a decision was made based on maintaining harmony or peace.

The way these requirements are referred to in the letter drafted by the council provides additional support for this interpretation:

They are referred to as “requirements” (ESV, CSB, NIV), or “necessary things” (KJV, LEB, NKJV, RSV), or “essentials” (NASB, NRSV). Yet, the closing statement of the Council’s letter on the matter—“If you keep yourselves from these, you will do well”—also appears to lack the force of a commandment or obligation. Especially since three of the four restrictions are dietary, and the teachings regarding food elsewhere in the NT indicate the dietary restrictions given in the Mosaic Law are no longer binding (Mark 7, Rom 14, etc.). Indeed, N. T. Wright, in a comment on Romans 14, notes that “Paul did not himself continue to keep the kosher laws, and did not propose to, or require of, other ‘Jewish Christians’ that they should, either.”2

Therefore, these four restrictions appear to have been given neither as a matter of salvation nor as a commandment or obligation of obedience. Instead, they seem best understood as a directive for maintaining harmony and unity in the nascent Christian church.

Acts 15 partially answers our “two law” question. It reveals that neither Jews nor Gentiles are required to be circumcised or keep the Mosaic Law as a matter of salvation. We are all saved the same way: by grace through faith and not by works (Eph 2:8-9). Additionally, the council’s decision reveals that Gentiles are not required to keep C+ML as a matter of obedience.

This leaves one question unanswered: Are Jewish believers in Jesus obligated to keep circumcision and the Mosaic Law? Acts 15 does not directly speak to this question. If the answer is yes, it would mean that, although there is a single way to salvation, Jewish and Gentile believers are to walk out their obedience differently. But, alas, we would need to expand our search to other NT passages to find a sufficient answer to that question.