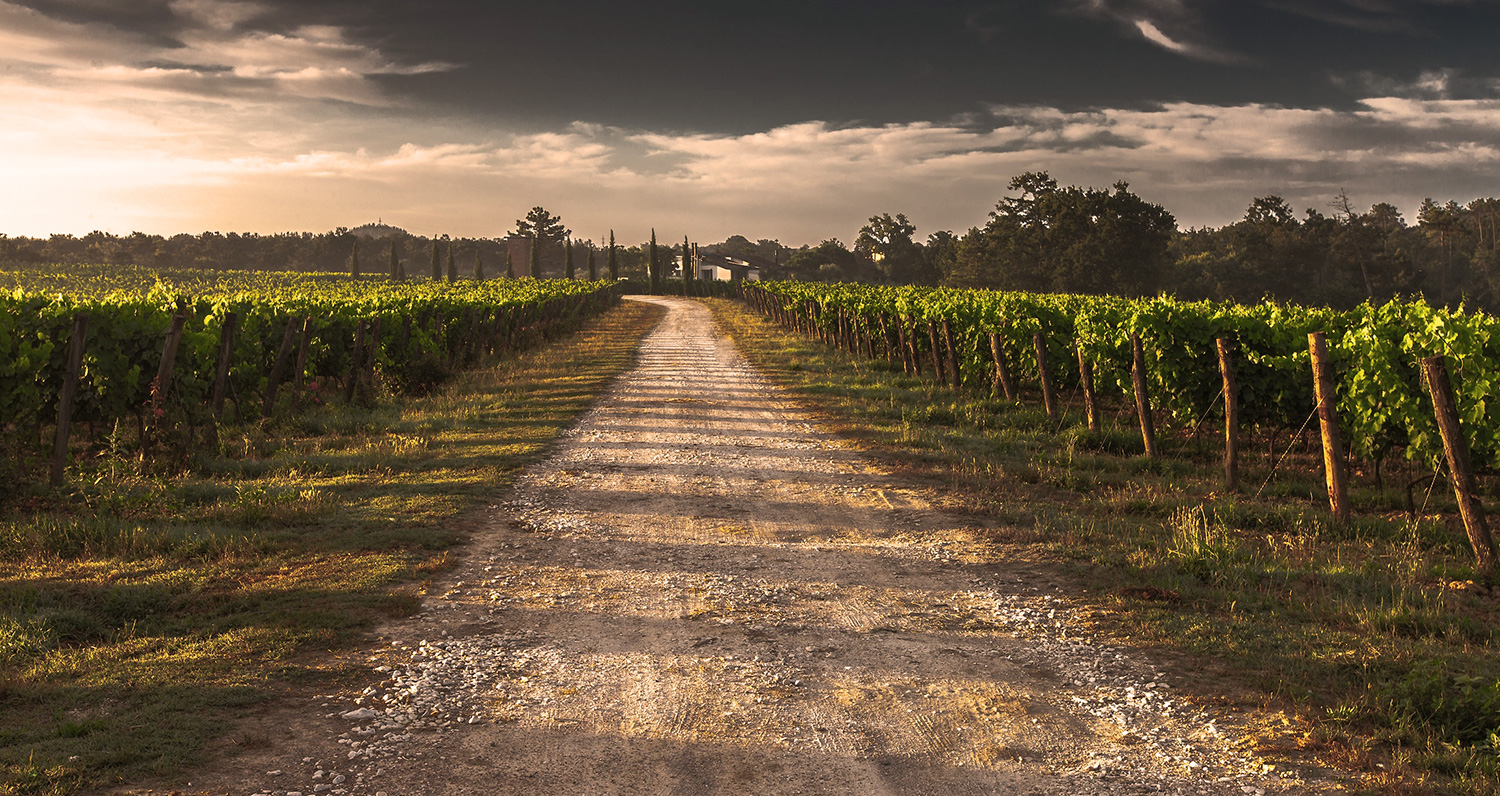 The early morning sun was streaming through the windshield of the old pickup truck as the silver-haired man climbed in. He set his hot cup of coffee in the drink holder and squinted as he adjusted his rearview mirror. The pickup sputtered to life and the man pulled out onto the dirt road that ran the length of his vineyard. He loved mornings. The cool mountain air, the promise of a new day. He also loved how his little vineyard brought joy to his corner of the world. Not just in the enjoyment of its final product, but also in its ability to offer employment to men who needed it.

Within ten minutes he was easing his truck to a stop on Main Street, just outside the cafe. As usual, there were a group of migrants sipping coffee out on the sidewalk. They were bright-eyed and eager for work. Juan, the tall, friendly one, was always the first to approach.

“Buenos Dias, Mr. Joe!” He said cheerfully. “How many do you need today?”

“You got it!” Juan called out four names and he and the four lucky men climbed into the pickup bed. They settled in to enjoy the rest of their coffee and the beautiful drive to Joe’s place, thankful for another day’s work.

Later that morning Joe was back on Main Street. He had to collect a few things and saw two day-workers sitting on a bench talking.

“Mornin’ fellas. Are you looking for work today?”

“Si,” said the older man. “We’ve been out here since it was dark, but no one hired us today.”

“Well, I’ve got work for you. I’ll pay you fair if you’ll help me out at my vineyard.”

The men’s faces brightened. “Gracias, señor!” Joe drove them back to his vineyard and put them to work.

The harvest was coming in strong and the forecast was calling for bad weather the next morning. Knowing he needed to get two days worth of work done today, Joe drove into town again at lunchtime and found a few more workers eager for a job and thankful for the opportunity. He just might make today’s harvest goal after all.

Later that afternoon, as Joe walked out of the tractor supply store, he came across two more migrants standing around and looking bored.

“Have you fellas been standing here doing nothing all day?” He asked.

The men looked at him sheepishly and shrugged their shoulders. The heavier man spoke up. “No one has hired us, señor.”

That evening, as the sun began its descent behind the hills on the opposite side of the valley, Joe called his workers over to his front porch where he had snacks and fresh lemonade laid out for them.

“Fellas, thank you for your help today. We got the work done that needed doing. Grab yourselves some refreshments and head over to that trailer there.” Joe pointed across the way to a small construction trailer with a light on inside and the door hanging open. “My foreman, Frank, will get you paid up and bring you back into town.”

A few minutes later the men were standing shoulder to shoulder in the small trailer. They were chatting and snacking in front of a desk as Frank tapped away on his laptop. After a moment, Frank stood and addressed the workers.

“Alright gentleman, we’re going to do this in an orderly fashion. Let’s start with the men that came in last and work our way toward those who’ve been here since dawn. Who arrived with Joe late this afternoon?” The two men Joe had met outside the tractor supply store stepped forward.

Frank consulted his laptop and said, “Okay, you guys arrived at 3:02 PM today. You’re each getting $120 for your work.” A hushed thrill ran through the crowd as Frank counted out the cash and handed it to them. If these last two guys were getting $120, how much more would the rest of them get?

Frank continued working his way down the list, paying each man $120 for their work. As the paid workers gathered outside the trailer, they began to grumble. It sure didn’t seem fair that the two guys who only put in a couple of hours should get the same pay as the rest of them, who had worked much longer.

Last to be paid was Juan. He, too, received $120. He stood for a moment looking at the cash in his hand, unsure if he should say anything. Frank saw something was eating at the man.

“It’s just…” Juan paused. “You paid them the same amount as us and we were here since morning. We did most of the work in the heat of the day. That doesn’t seem fair.”

Juan nodded. The foreman put his hand on Juan’s shoulder as they stepped out of the trailer and into the group of grumbling workers.

“Gentlemen,” Frank began. “I get what you’re complaining about. But doesn’t our boss Joe have the right to do what he wants with his own money?” He was met with shrugs and reluctant grunts of agreement. “If Joe wants to pay the last man the same amount as the first man, that’s his choice to make. You were all paid fairly, right?” All heads nodded in the affirmative.

“Okay, so don’t be jealous of the next guy because Joe is a generous man. Be thankful for your day’s pay. Now, let’s get rolling.”

With that, they all piled into the vineyard’s passenger van and Frank drove them back into town.

I share this short story for perhaps an unexpected reason: I’ve been doing some research on the idea of “deathbed conversions”, where men and women come to faith in God at the very end of their lives. Interestingly, a number of famous people are reported to have had such conversions, including Oscar Wilde, Charles Darwin and, of late, Stephen Hawking. (Of course, no one truly knows the heart of a man other than God and that man. So who knows?)

The thing that strikes me as odd is how some people consider the idea of a deathbed conversion as a sort of “get out of jail free” card. They consciously choose to live their lives with no regard for the existence of a God, knowing that they can always pull a last-minute move. To some, God is a business card you keep in your wallet just in case. You have no intention of ever calling the number on the card, but you keep it anyway because you never know.

In reality, choosing to believe Jesus and accept His forgiveness is no different whether we’re 18 or at death’s door. It’s not as if there is a set of words we can recite like a magic spell in our final moments that will change everything. Rather, belief is a simple, personal act of faith between us and God. It does not require a priest, or a religious ritual, or even audible words. If we’re sincere, it’s real. If we’re insincere, it’s false.

For example, if Oscar Wilde on his deathbed thought, “Oh crap! What if I was wrong my whole life? I’d better make a statement of faith in God just in case!”, then his statement of faith is meaningless. He’s just calling the number on the card in his wallet in a Hail Mary (pardon the pun) act of self-preservation. God is not fooled by our insincere gestures. On the other hand, if Wilde on his deathbed thought, “Now I get it! God, I’ve fought against You my whole life but now I believe You’re real and I see that I need Your forgiveness,” then it counts. He is forgiven and his salvation is real.

In other words, it’s all about the heart. Jesus teaches us over and over again throughout the New Testament that it’s not about our external actions, it’s about our internal motivations and sincerity. And like the vineyard owner in the story above (which was my paraphrase of the parable Jesus told in Matthew 20:1-16), God is generous. Even if it’s not until we’re laying on our deathbed that we realize we need Him, God, in His mercy and unbounded love, wants to give us the same reward that He gives to the man who has been faithful his entire life. Is that fair? No. But it’s unfair in our favor. And that shows us how astoundingly generous God truly is.

“The Lord is not slow in keeping his promise, as some understand slowness. Instead he is patient with you, not wanting anyone to perish, but everyone to come to repentance.”