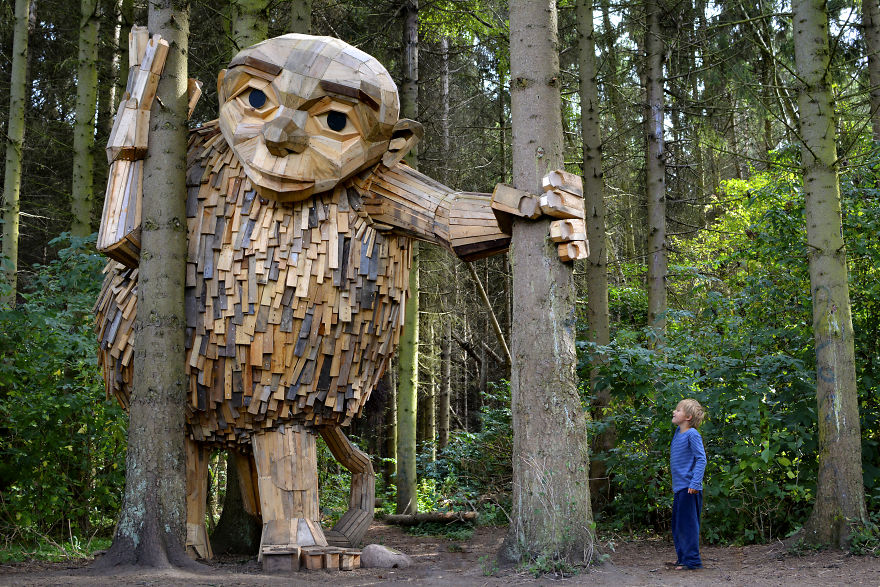 Danish artist Thomas Dambo created six large recycled sculptures and cleverly hid them in some of his favorite places around his hometown of Copenhagen. He intentionally chose locations off the beaten path where people don’t often go. The sculptures can be found by using a treasure map or by reading a poem engraved in a stone near each sculpture that provides hints on how to find the others.

Can you imagine going out for a walk in the forest and coming across the hidden giant in the photo above? That would be a fun surprise!

My first thought when I saw this photo was probably the same thought that you had: someone built a wooden statue of a giant in a forest. Yes, I realize the thought seems so obvious it’s barely worth mentioning. But hidden inside that thought is, I believe, a surprisingly convincing piece of evidence for the existence of God. So let’s freeze that moment in time when we first recognized the statue and analyze what led us to that “obvious” thought.

According to neuroscientists, the human brain effortlessly detects and classifies objects from among tens of thousands of possibilities  within a fraction of a second. So within the first 300-500 milliseconds after viewing the giant wooden statue, we would come to recognize a series of shapes—rectangles, triangles, eyes, face, head, arms, legs—and our brain would combine them and recognize them as a humanoid figure. In fact, if we were to stumble upon this giant in person, we might even be startled for a moment, thinking we were looking at an immense living figure in the middle of the forest.

However, almost instantly, we would also notice the giant is made of wood and, knowing wooden giants aren’t living things, we would quickly conclude this is a just statue.  And from there, because we know that, unlike the trees it’s hidden among, wood does not naturally grow into the complex shapes that make up this figure,  we would arrive at the only logical conclusion given the data: someone built a wooden statue of a giant in a forest.

Sounds pretty straightforward, right?  But isn’t it interesting that we would conclude it was built by someone rather than something?  We know intuitively that a windstorm did not indiscriminately whisk up a bunch of loose sticks in the forest and drop them by chance into the shape of this giant. Natural forces are incapable of creating something of this complexity on their own. This statue is clearly the result of intention and volition, the product of a mind.  In short, it was designed.  And the only agents in the universe that we currently know of with the intelligence to design something of this complexity are human beings.

A rudimentary deduction, indeed, but it opens up some intriguing larger questions: How did we know that the figure was a product of design, not chance? What exactly is design? How do we define a “designed” thing? In a recent conversation with some atheist friends on Twitter, the following question was asked:

This turned out to be a deceptively complex question. As a guy who makes his living creating things, the concept of design seemed to be a properly basic knowledge; one of those things that we all just “know when see it.” But the more I tried to nail down an answer, the more it got away from me. So I decided to see if the dictionary could help.

And under the definition of the root word design you’ll find, among other entries, “to intend for a definite purpose”, “to form or conceive in the mind; contrive; plan”, and “to assign in thought or intention; purpose”.

So behind the concept of “design,” we find a great deal of emphasis on the property of intentionality. This makes sense because how could something be both designed and unintended? Even in the case of modern art—such as Jackson Pollock’s seemingly random technique of pouring and dripping paint onto the canvas—the final product still contains many elements of design that are contingent on the artist’s intent, such as color, proportion, and space.

So design requires intent, and intent can only come from a mind. Therefore, evidence of design is evidence of a mind.  When we consider objects such as a wooden giant or a house or a motorcycle, we can easily see intent on the part a designer. But what about objects like the sun or the universe itself? At that level, it’s not so evident if intent exists or not.

As an example, consider the beautiful garden below:

This garden is teeming with evidence of design. In it, we see organization, form, patterns, repetition, harmony, and unity. Because these elements of design are present, we know that this garden was designed and did not occur randomly. Moreover, because design requires intent, and intent can only come from a mind, we can conclude that there was a mind (or perhaps several minds) behind this garden.

On the other hand, a non-designed garden wouldn’t even be called a “garden.” Rather, it would be a wild overgrowth of nature; an arbitrary collection of weeds and plants growing randomly, assembled without form or organization:

So let’s take our investigation for evidence of design back to our hidden giant:

In the statue above, there is a wealth of undeniable design evidence; form, repetition, patterns, balance, and so on.  The reason we instantly knew someone built this statue is that we intuitively recognized the presence of design.  And from there, we inferred upward to a mind as the ultimate source of that statue.

So what about the little boy next to the giant? He shows all the same elements of design as the giant, and he is far more complex.  We’ve determined that the wooden figure was designed, so by the same logic, we can conclude that the human being next to it must also have been designed. To claim that the statue is the product of a mind, but the human being is the product of a mindless, unguided evolutionary process would be illogical.

That begs the question, what about the forest in which the boy and the giant are standing? Physical nature is teeming with design! Trees, leaves, mountains, oceans, planets, galaxies, the laws of physics and chemistry, the foundational physical constants in the universe—they all display staggering levels of design and thus evidence of a mind that designed them.

How can we claim that the designs on the left are the result of a mind while the designs on the right are the result of a mindless, unguided process? The only way to arrive at that conclusion is to start out with the presupposition “god does not exist” and then disregard all evidence to the contrary. Mindless, unguided, random processes can only lead to arbitrary, disordered outcomes.

Given the astounding level of evidence for design in the universe, the most logical conclusion is that the universe was designed. Moreover, because design requires intent, and intent can only come from a mind, it’s reasonable to conclude that there is a mind behind the universe. And what kind of mind would it take to design a universe of such inconceivable complexity?

“In the beginning God created the heavens and the earth.” Genesis 1:1

“For since the creation of the world God’s invisible qualities—his eternal power and divine nature—have been clearly seen, being understood from what has been made, so that people are without excuse.”
Romans 1:20