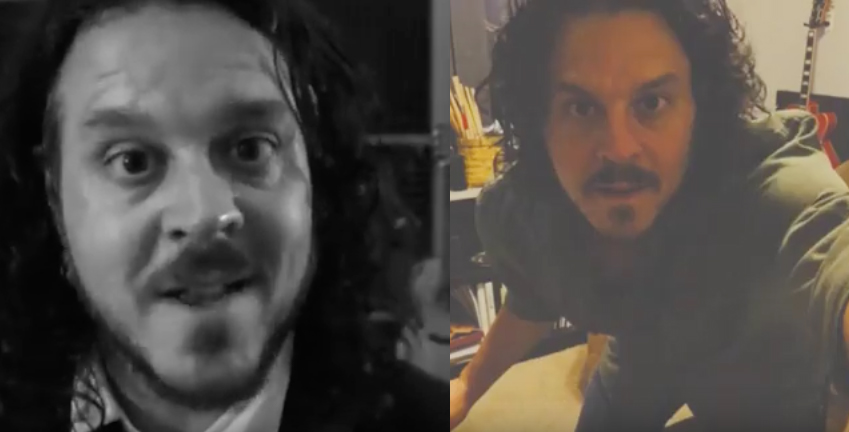 What happened between the making of these two videos?

A little over a year ago I was hired as a UX Designer by a healthcare company that had just merged with another company. They were having a big “Are You Ready?” promotional campaign for the unveiling of the new company name and held a contest for employees to submit the most creative “Are You Ready?” video.

I figured since I was a new guy in a big company where hardly anyone knew me, and even fewer people knew what a UX Designer was, I would submit something. I decided on a musical concept for the video—which really stuck out in the corporate world—and gave it my best shot.

Mine was one of the last videos submitted and it ended up taking second place, but it did wonders for me within the company in unexpected ways. I got lots of emails and comments from people who now recognized me, and I was able to meet the CEO and other leaders within the company which was a big help in doing my job.  Plus I got to talk shop with other weekend warrior musicians in the company, which is always fun!

Recently we had a First Birthday Party celebrating one year under the new name. Since I can’t sing I decided to do an instrumental version of the Happy Birthday song and re-harmonize it a bit. This time I won the contest (and $500!) and it had the same end result of generating lots of conversations with co-workers I would not have otherwise had.  As I watched both videos (shown below) I was struck by the huge changes in my life that had occurred between the two videos. I could see a lot of those changes in the videos themselves, and not just that I was living in a new home and had lost 40 pounds.

In these two videos, I see the changes that happened in my heart and mind between May 2015 and May 2016; I even see them echoed in the production styles. The first video is shadowy and black & white and was shot at night. The second is colorful and well-lit and was shot during the day. (In fact, the sun was so bright in the window behind me I had to take a painting off the wall and place it behind the drapes to block the light.)

To really understand the difference in that year between videos it’s important to know where my life was when all this started.  I didn’t know it at the time, but in early 2015 I was in a perfect storm of financial, personal and professional turmoil.  Circumstances were converging and the tension was about to force a radical change in my life.

We had just completed what I considered a very successful Christmas tour with my band Dust & Daisies.  We’d spent a couple of weeks playing Christmas shows in Norway (a country I love, where I now have many friends I love) then came back to the US and played a few more shows.  So as 2014 ended I was very excited about the prospect of making music and ministry the main thing in my life. In fact, I had set goals for myself for 2015 to work hard to do just that.

I petitioned God in prayer to guide me in this pursuit, to open doors, and give me favor.  In my zeal, I assumed He would surely want me to spend my life using music as a way to share His love with people.  I asked Him to show me where He wanted me to go and what He wanted me to do.  Within a week I felt very clearly Him telling me He had other plans for me.  There was no audible voice, of course.  It was a combination of events transpiring around me, opportunities He shut down, and a sense in my spirit that I needed to submit to Him.

We were heavy in debt from a business venture, a kid’s virtual world we built but were unable to sell for a profit.  At the same time, my freelance work had inexplicably dried up.   After at least a dozen years of the phone always ringing with a new project, no one was calling.  I was beginning to pull my head out of the sand and take stock of my life and see what a bad spot we were in financially, and what little hope we had for improvement.

So it was with a heavy sense of disappointment, sadness in my heart and a stone in my gut, that I decided to look for a full-time job.  I felt like I’d failed in so many ways; as a husband and father, as a businessman, as a musician, as a Christ follower.  The only redeeming thought was that I was never really passionate about being a freelance web/graphics guy anyway.   I enjoyed it much of the time, but the truth is it was just something I was good at; the best way I’d found to earn a living.  My passion was always in music and creative expression, so I thought. “If I have to spend my days doing something that’s not my passion, I might as well do it on someone else’s dime.”  Let my new employer worry about the parts of running a business that I never liked:  accounts payable and receivable, taxes, HR, chasing down clients for payments, and the like.

I remember the first day I drove to my new job and parked, watching all the workers file into the 8-story office building.  For 20 years I had worked for myself, as an entrepreneur, a freelancer, and consultant.   That was where I found my identity.  But now I found myself thinking “I am a worker bee” as  I followed the crowd inside, unsure what I was getting into.  A few weeks later I submitted this video.

The video was shot in my home office/studio which was in the front room of our home. I didn’t know it at the time but I was diabetic.

Little did I know how wrong I was to fear this change in my life.  It was the beginning of a new chapter that never would have been written had I chosen to follow my own path.

In the months that followed the making of this video we sold our home and used the bulk of the equity to dig ourselves most of the way out from under the crushing business debt.  So not only had I started making a regular salary, we suddenly had a huge burden lifted off our backs.

In September I was diagnosed with type II diabetes and, in an effort to avoid medications and future complications, I decided to try and control it with lifestyle changes.  Something inside me clicked and with my wife’s help, and with the tools I’d been learning from Celebrate Recovery, I was able to radically change my diet. I cut out sugars, reduced carbs, added lots of raw veggies and lean meats.  Plus I started watching my portions and getting active.  Nothing huge, I had to keep it all manageable for me, a non-athlete. Every day at work I walked a mile, I started taking the stairs up to the 8th floor instead of the elevator, I started taking the dog for long walks on the weekend, and doing short BurstClub workouts a couple of times per week.

When I went back to see the doc in January, my blood sugar was well within normal range, and lots of other stuff had improved, too.  (Triglycerides, cholesterol, weight, blood pressure, etc.)  I’ve lost a little over 45 pounds now and want to drop another 10-15 if I can.  My diabetes is being successfully controlled, which means I don’t need to take any medication and I’ve added to both the quantity and quality of my remaining years on this planet.  (At least statistically speaking. Tomorrow is guaranteed to no man!)

During this time I began teaching at Celebrate Recovery, which I’ve found is something I love.  As I’ve been going through the steps and working on my issues (pride, people-pleasing, anger, lust, and others) I’ve felt myself finally growing up.  I’ve started engaging in life, becoming a better husband, a more responsible citizen, a better steward of my family, finances, and health.  And my relationship with Jesus has deepened, too.  In fact, for a while, I was seriously looking into going to seminary to pursue a Ph.D. in Christian Philosophy & Apologetics.  (Not an easy undertaking considering I don’t have any education past a high school diploma!)  That idea is on hold right now pending direction from God, but the dream still lingers.

I believe, at age 47, I have finally become a man.

Perhaps the most surprising change, though, is how much I enjoy my new job.  While I was kicking and screaming like a child, God was being firm with me because He knew what I needed.  When I finally, reluctantly gave in, I was surprised to find something enjoyable.  I’m still delighted by the simple things I never had while self-employed.  Like the fact that every morning I discover someone has emptied the garbage can next to my desk and the fact that I get paid time-off and holidays.  How fun!  More importantly, this is a job where I feel challenged, engaged, competent and rewarded.  I make good money, have great benefits, and I get to make a major contribution to the creation of a software platform that is both fascinating from a business perspective and brings value from a human perspective.

So here’s the video I made 1 year later for my company’s first birthday party.

In this video, I am 40+ pounds lighter, in a new home, nearly debt-free and happy with my new career.  Had I known this was the path God was trying to lead me down for the past couple years (or, short of knowing, had I trusted Him enough) I wouldn’t have fought it so long.  I would have surrendered a lot sooner, accepting hardship as a pathway to peace.

Hopefully, I’ve become a little wiser and a little less self-centered in the process.  I guess I had to learn the hard way that God’s plan for my life is so much higher and better than my best-laid plans ever will be, and that my true identity is found in my relationship to Him, not in what I do for a living or what I think I am.  And I praise Him for loving me enough to teach me that lesson.

6 thoughts on “The Year in Between”