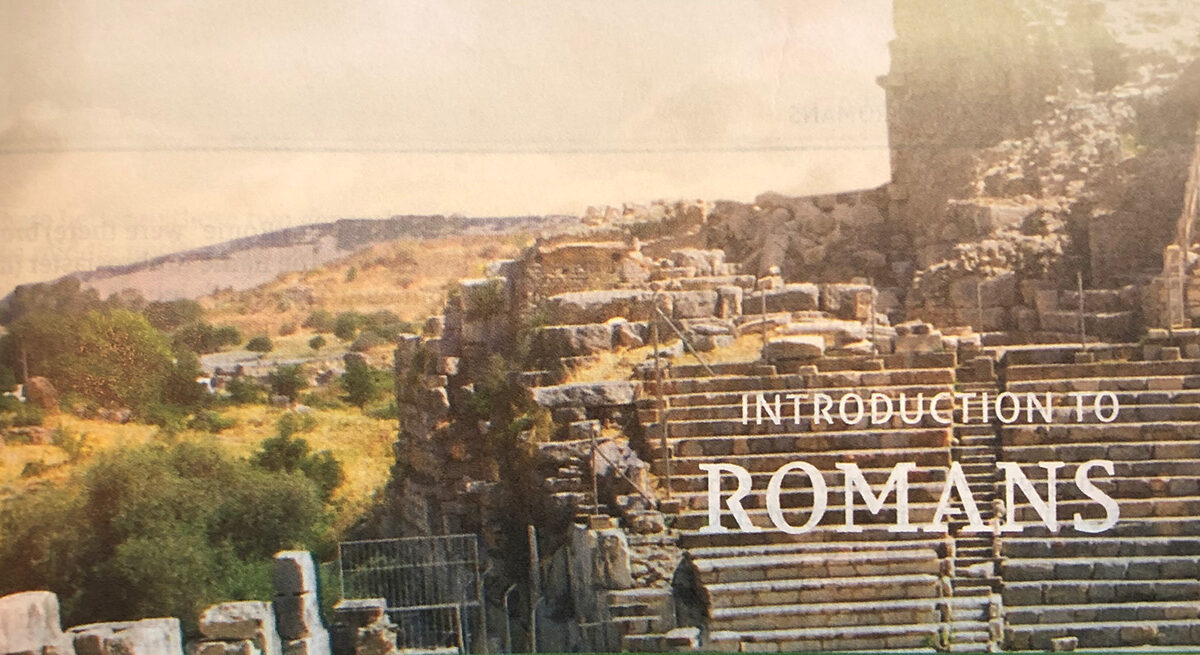 Romans 3:31 is a common stumbling block for those trying to determine if—and to what degree—Christians are expected to keep the Law of Moses. It reads, “Do we then overthrow the law by this faith? By no means! On the contrary, we uphold the law.” In this verse, the author (the apostle Paul) indicates that our faith in Jesus does not overthrow the law but, instead, upholds it. Let’s dig into this passage in context and see what Scripture teaches us here.

The book of Romans is a letter written by the apostle Paul to the believers in Rome, which included both Jews and Gentiles at the time. It was written around AD 57, while Paul was in Corinth, and this letter is a theological tour de force. Paul’s teachings here are dense and deep. To fully understand what he is teaching in Romans 3:31, we will need to read through the larger passage in which it is found. Paul is teaching about the righteousness of God through faith, and his idea starts at v. 21. We will begin there and work our way up to the verse in question.

The phrase “righteousness of God” refers to being right with God; salvation. Paul is teaching that Jesus is salvation to all who believe in Him. He adds that the “Law and the Prophets” (a common Hebrew way of referring to the Jewish Scriptures, aka the Old Testament) foretold the coming of Christ. And it is Jesus, not the law, that saves us.

22 … For there is no distinction: 23 for all have sinned and fall short of the glory of God, 24 and are justified by his grace as a gift, through the redemption that is in Christ Jesus, 25 whom God put forward as a propitiation [which means an atoning sacrifice] by his blood, to be received by faith…

This passage teaches the universality of sin—all have sinned, both Jews and Gentiles. Likewise, God’s gift of righteousness is available to all who place their faith in Christ, whether Jew or Gentile. This is a common theme in the New Testament. Salvation is not based on race, ancestry, or law but faith.

25…This was to show God’s righteousness, because in his divine forbearance he had passed over former sins. 26 It was to show his righteousness at the present time, so that he might be just and the justifier of the one who has faith in Jesus.

God left the sins of previous generations unpunished under the Law of Moses. This same teaching is found in Hebrews chapters 9 and 10, where we’re told that the blood sacrifice of bulls and goats—as required under the Mosaic Law—was only a reminder of sin. It could never actually take away sins. So Christ’s sacrifice redeemed even the sins committed under the first covenant (Heb 9:15). And here in Romans 3, Paul says that God did not leave those sins unpunished because he was indifferent toward them. Rather, it was to demonstrate His forbearance and kindness toward mankind. And then Paul asks:

27 Then what becomes of our boasting? It is excluded. By what kind of law? By a law of works? No, but by the law of faith.

If all have sinned (v. 23), and if God saved us while we were still in our hopeless, sinful state, then no one has the right to boast. Even if there was an Israelite who could claim to have kept the Law of Moses perfectly, they were still in need of salvation because that law did not bring salvation. Instead, we are saved by what Paul calls the “law of faith,” which credits our salvation entirely to Christ. We did nothing to save ourselves, and therefore we have nothing to brag about, including any works of obedience to the law. One commentary put it this way:

It is the law which shows people that they have failed in all points to be righteous, forcing them to the conclusion that they must accept righteousness as a free gift of God. The law says, “You have nothing to boast in and I can prove it!”—and then proceeds to name all the places in which we have failed morally. Therefore, the free “gift of God” (Rom. 6:23) is the only way that we can attain salvation, and it took the law to reveal it. Therefore, the law serves the gospel by removing all boasting about how one might be saved.

Because justification is not based on keeping the law, God can reconcile all people to Himself: both the circumcised (the Jews) and the uncircumcised (the Gentiles, who were never under the Law of Moses). The “law of faith” applies to both Jews and Gentiles. I love how NT Wright put it,

The message is simple: all who believe in Jesus belong to the same family and should be eating at the same table. This is what Paul’s doctrine of justification is all about.

At this point, we now have the context we need to look at the verse in question. In Romans 3:31, Paul asks and answers a rhetorical question. Based on the verses we just looked at, he asks:

31 Do we then overthrow the law by this faith? By no means! On the contrary, we uphold the law.

John Stott’s commentary lays out three ways to understand this verse. And it all depends on how we take Paul’s use of the word “law” in verse 31. In Greek, Paul uses the word nomos, a generic word for “law.” And the text and the context both allow the interpretation of this verse as referring to either the Law of Moses specifically, or more generally to the whole of the Hebrew Scriptures. Because in Hebrew, the word torah—which simply means “instruction”—can refer to the Mosaic Law given at Mount Sinai or God’s broader teachings found in the whole of the Hebrew Bible.

If Paul is referring to the Hebrew Scriptures in general, he is showing that Old Testament taught that justification came only by faith, which would tie back to what he wrote at the beginning of this passage. Verse 21 says, “But now the righteousness of God has been manifested apart from the law, although the Law and the Prophets bear witness to it.” In this case, Paul is using his statement in verse 31 to pivot into the next idea he wants to address. In the next verse (Romans 4:1), he begins a “case study” showing how Abraham and David were justified by faith in the Hebrew Scriptures.

If verse 31 is interpreted as referring specifically to the Mosaic Law, there are two additional ways to understand the notion that faith upholds the law. We could interpret this passage as Paul’s effort to assuage the concerns of his Jewish readers that he is teaching the Law of Moses was overthrown and has become useless. Paul affirms a few chapters later that “the law is holy, and the commandment is holy and righteous and good” (Rom 7:12). (Notice this statement is in the present tense.) So even under Christ and the New Covenant, the Law of Moses still serves a purpose. In Romans 7, Paul says,

There is such a thing as sinful behavior. There is also such a thing as righteous behavior. How do we differentiate between the two? Paul tells us that God’s law is the standard by which the two are distinguished. If God had not given us that standard, we would not know what sin is. And in Paul’s case, once he understood what it meant to covet, his sin nature reared its ugly head and caused him to covet even more. It is that rebellious sin nature that every human being struggles with. Paul describes it this way, “For I do not understand my own actions. For I do not do what I want, but I do the very thing I hate” (Rom 7:15). (I don’t know about you, but I resemble this verse!)

The law reveals our sin and underscores our need to be saved from it. And here in Romans 3:31, when Paul says we “uphold the law,” he means that when we come to faith in Jesus, we validate the purpose of the Law of Moses, which was to reveal our sin and point us to Christ. As Stott writes, in Paul’s teaching of salvation,

the function of the law is to expose and condemned sin, and so to keep sinners locked up in their guilt until Christ comes to liberate them through faith. (See Gal 3:21 ff.) In this way, the gospel and the law dovetail with each other, since the gospel justifies those whom the law condemns.

Lastly, in Romans 3:31 we could see Paul responding to accusations that he was actively encouraging disobedience by teaching that justification comes through faith rather than obedience. In Romans 6-8, Paul fervently refutes charges of antinomianism (teaching “against the law”). So in 3:31, he may be anticipating that argument. In that case, what he means is that those who are justified by faith and living according to the Spirit are upholding the Mosaic Law in the sense of fulfilling its righteous requirements. This is exactly what he teaches later in the book. For example, in Romans 8, he writes:

3 For God has done what the law, weakened by the flesh, could not do. By sending his own Son in the likeness of sinful flesh and for sin, he condemned sin in the flesh, 4 in order that the righteous requirement of the law might be fulfilled in us, who walk not according to the flesh but according to the Spirit.

In other words, the righteous requirement of the law is fulfilled by those who walk according to the Spirit. And again, in Romans 13:

The righteous requirement of the law is fulfilled by those who walk in love, according to the Spirit.

What does all this mean? We started our discussion wanting to understand what Paul is talking about in Romans 3:31. And instead of a nice, tidy answer, the text left us with a range of viable possibilities. Sometimes (not always), that is all the Bible gives us. And we need to be careful to avoid forcing crisp, clean answers onto text that doesn’t necessarily support that option. I think Scripture was inspired that way intentionally. Rather than a legal code or an academic textbook, our loving Father gave us His Living Word in such a way that we are required to lean into it, and then lean on Him for understanding.

That said, there are two things we can glean from this verse, regardless of which interpretation we prefer. First, this passage plainly teaches that righteousness comes through faith, not through obedience to the law. And second, our saving faith in Christ validates the purpose of the Law of Moses. Our faith fulfills both what the Hebrew Scriptures foretold and the righteous requirements of the law.

3 thoughts on “We Uphold the Law”