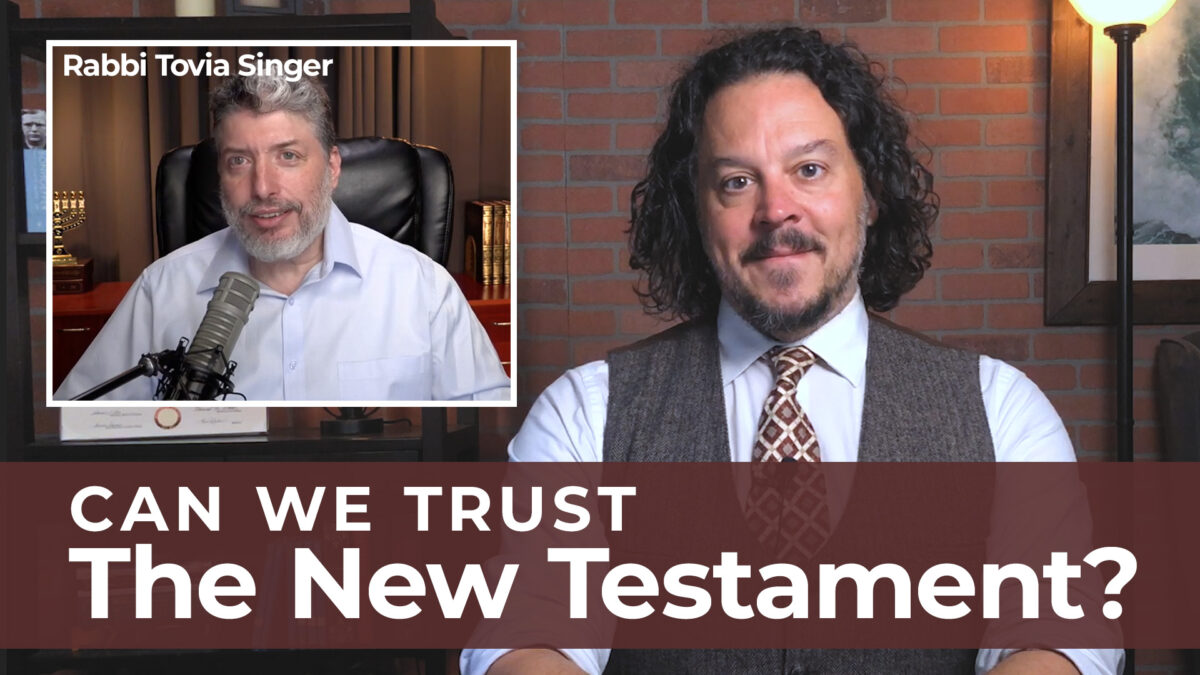 Can We Trust the NT Writings? (Part 1)

Anti-Christian Rabbi Tovia Singer has a great line he likes to use regarding New Testament authorship.

Luke does not end “Yours truly, Luke.” Matthew doesn’t say, “And best wishes for the happy new year, Matthew.”

This is a brilliant way to make his point. Honestly, I find Rabbi Singer a masterful communicator. Many people, including Christians, find him convincing because he speaks with such confidence, knows Hebrew, and is familiar with the New Testament text. But a closer examination of his arguments reveals significant problems. His anti-Christian bias is so strong that he commonly builds his claims on double standards without seeming to realize it. This is the case with many of his arguments against the New Testament. And in this two-part article, we’ll examine six of the rabbi’s arguments against the validity of the New Testament writings. My goal in doing so is to help clear away confusion and half-truths about Jesus and the NT.

We destroy arguments and every lofty opinion raised against the knowledge of God and take every thought captive to obey Christ.

Rabbi Singer often casts aspersions on NT books with anonymous or unknown authorship. To be fair, I’ve never heard him make a false claim about the authorship of the New Testament books, nor the general timeline when they were written. What he does is raise red flags and insinuate that, where authorship is unknown, the books can’t be trusted. Here are some examples of the claims he makes.

Whoever wrote the book of Matthew, whoever wrote it, we don’t know. I know your Bible says “Saint Matthew,” but in reality the manuscripts don’t say that. It’s a later ascription assigned by the Church in the second century.

We cannot say who wrote [the Gospels, the author’s] names. Despite what you are told in Church, we cannot tell you where Mark was written. We have no idea . . . It’s important to bear in mind that all of the gospels, Matthew, Mark, Luke, and John are written anonymously.

You can see the intention of these statements in the way they are phrased: “I know your Bible says…” and “Despite what you are told in Church…” In other words, Head’s up, Christians. Your Bible and your Church are wrong. You are being misleading about these things. So, while Singer’s statements are factually accurate, he uses them in such a way as to cast doubt on the validity of the NT books. And he fails to mention that the same thing is true of many books in the Tanakh.

Consider, for example, the book of Genesis. Tradition says it was written by Moses, but the book doesn’t affirm that fact. Genesis never even mentions Moses’ name. And tradition holds that Jeremiah wrote the books of I and II Kings, but the books themselves don’t confirm that. They aren’t signed, “Best wishes, Jeremiah.” Tradition says that Samuel wrote the books of I and II Samuel. But, to paraphrase Singer, despite what you are told in the synagogue, we cannot tell you where the books of Samuel were written or who wrote them. In fact, they record the events of Samuel’s death. So if he’s the author, he certainly didn’t write the whole thing. And here’s what’s interesting. Because Rabbi Singer tries to use unknown authorship to undermine the validity of the NT, you would think he wasn’t aware of Samuel’s unknown authorship. But, surprisingly, he is.

Who wrote the book of Samuel? We have a tradition about this. But there are a whole bunch of authors, too. But that’s not why we believe in Samuel. It couldn’t all have been written by Samuel because Samuel dies in in the 25th chapter, okay? So you will not encounter any religious Jew who believes that the book of Samuel is part of our Scripture, our sacred history, because of the reliability and authorship of Samuel.

This telling acknowledgment makes Rabbi Singer’s arguments against the New Testament even more confusing. It doesn’t bother him that we don’t know the author of Samuel. But when it comes to the New Testament, unknown authorship implies that the books can’t be trusted? That’s not only a double standard, it’s a double standard he’s fully aware of using. Which raises a question. If Singer is aware of the unknown authorship of some of the books in the Jewish Bible, why does he still trust them as true?

When Abraham encounters three angels in Genesis 18, why do I believe it? It’s just faith. I can’t prove it. It’s not blind faith. I trust the book, and when I trust the book, therefore, if the book is true, if the events are true, I therefore trust what is described in that book. But it’s based on faith. I believe that Elijah and Elisha resurrected the dead. I can’t prove that.

Rabbi Singer is willing to take the Jewish Bible on faith despite unknown authorship. Yet, he casts aspersions on the NT because of unknown authorship. Which makes his arguments about the anonymous authorship in the New Testament seem like empty noise. Christianity, on the other hand, accepts both the Tanakh and the New Testament as the inspired word of God. And let’s face it. In the end, the human authorship doesn’t matter so much because we accept that the Ultimate Author of both texts is the God of Israel.

A second line of argument Rabbi Singer will use to cast doubt on NT authorship is when the alleged author refers to themselves in the third person. Here’s what he says about the book of Matthew:

Christians just believe that Matthew was actually written by Matthew., although there’s nothing in the book of Matthew that would indicate that. Quite the contrary. Matthew 9:9 makes it very clear that the writer was definitely not Matthew by writing in the third person.

In other words, Singer says that because Matt 9:9 is written in the third person, it shows the book wasn’t written by Matthew. And he’s right about the third-person reference. Matthew 9:9 says,

As Jesus passed on from there, he saw a man called Matthew sitting at the tax booth, and he said to him, “Follow me.” And he rose and followed him.

The author didn’t write, “As Jesus passed on from there he saw me sitting at the tax booth.” Matthew is referred to in the third person. And regarding John’s gospel, Singer says:

The book of John is explicit. The author, whoever wrote it, is explicit that…he’s not John. You’ll find that in John 21:20, where the writer, whoever he is, is saying that he got this from “the disciple whom Jesus loved,” which would be John. So [the author] is saying, “I’m not [John]!”

Again, the fact that the alleged author refers to themselves in the third person is enough for Rabbi Singer to conclude that they didn’t actually write the text. Here’s what’s interesting about this line of argument. Rabbi Singer is on record time and again affirming that Moses wrote the Torah.

The Torah was written by Moses who was inspired by the God of Abraham, Isaac, and Jacob.

With that in mind, let’s look at a verse that Moses wrote in Torah. See if anything jumps out at you.

So Moses came and called the elders of the people and set before them all these words that the Lord had commanded him.

That’s right. In this verse, the author refers to Moses in the third person. According to Singer’s logic, this means Moses did not write the Torah. In fact, in the Torah, Moses is referred to in the third person over 500 times. So if a third-person reference to the author means that person didn’t write the text, then Moses didn’t write the Torah. And if books of anonymous authorship can’t be trusted, what does Singer do with the Torah? This is a glaring double standard. The case he is trying to build against the New Testament cuts against his own Scripture. It reminds me of those cartoons where the person saws off the end of the branch that they are sitting on.

Rabbi Singer believes tradition, which says that Moses wrote the Torah. And I’m fine believing that too. (Although the last chapter of the Torah reports the death of Moses, so he wasn’t likely the only author.) But ultimately, our faith isn’t placed in human authorship but in Scripture’s Divine Author. And all the noise that Singer makes about the authorship of the New Testament is just a distraction from that fact.

In his arguments against the validity of the New Testament, Rabbi Singer also sprinkles in a bit of scholarship. He’ll bring up hypothetical documents that liberal scholars have posited to explain the similarities between the Synoptic Gospels (Matthew, Mark, and Luke). For example, Singer talks about a theoretical document called Q, which is based on the theory that the similarities between the Synoptic Gospels suggest they were copied from another source. This other source called “Q.”

Matthew and Luke clearly were relying on another source for those passages which are in common. But whoever wrote Mark did not have access to that source. And that source is called “the source,” it’s called Q, which stands for the German word for source: quell. So that’s Q.

What Singer does not tell you is that this theory about a Q gospel is just that: a theory. There is no actual evidence to support it. No manuscript fragments have been found. No early writings from the church fathers mention anything that could be considered a Q source. Q is a product of liberal scholarship, and it is promoted by people like Rabbi Singer, who don’t believe the NT is divinely inspired and God-breathed.

For Christians who believe that the New Testament is Scripture, this theory is, in the words of Shakespeare, “full of sound and fury, signifying nothing.” The fact is that the Old and New Testaments both contain some texts of anonymous authorship composed in unknown locations and for which we don’t have the autographs (original writings). We have copies of copies. This fact doesn’t bother Singer when it comes to the Tanakh. For him, it’s only an issue when it comes to the New Testament. That’s another double standard.

The bottom line is that we can affirm the entire Bible as true and inspired because, while we may not know who wrote all the books, we trust that God does. And in the end, we don’t place our faith in human authors but in the living God who inspired the sacred text. Nothing could prevent Him from communicating His Word to His people. So whenever you hear someone bring up the Q gospel (or a source called L), just know that they have wandered off into the land of liberal speculation and you can safely reject their arguments.

I hope working through these arguments against the New Testament is helping you start to see that they aren’t nearly as strong as they first appear. When we take the time to think them through, they’re actually quite problematic. In part two of this article, we’ll examine three more arguments from the good rabbi.

3 From the video “If the New Testament is false, isn’t the ‘Old Testament’ false as well?”

4 from the video “How did these four Gospels make it into the NT?”