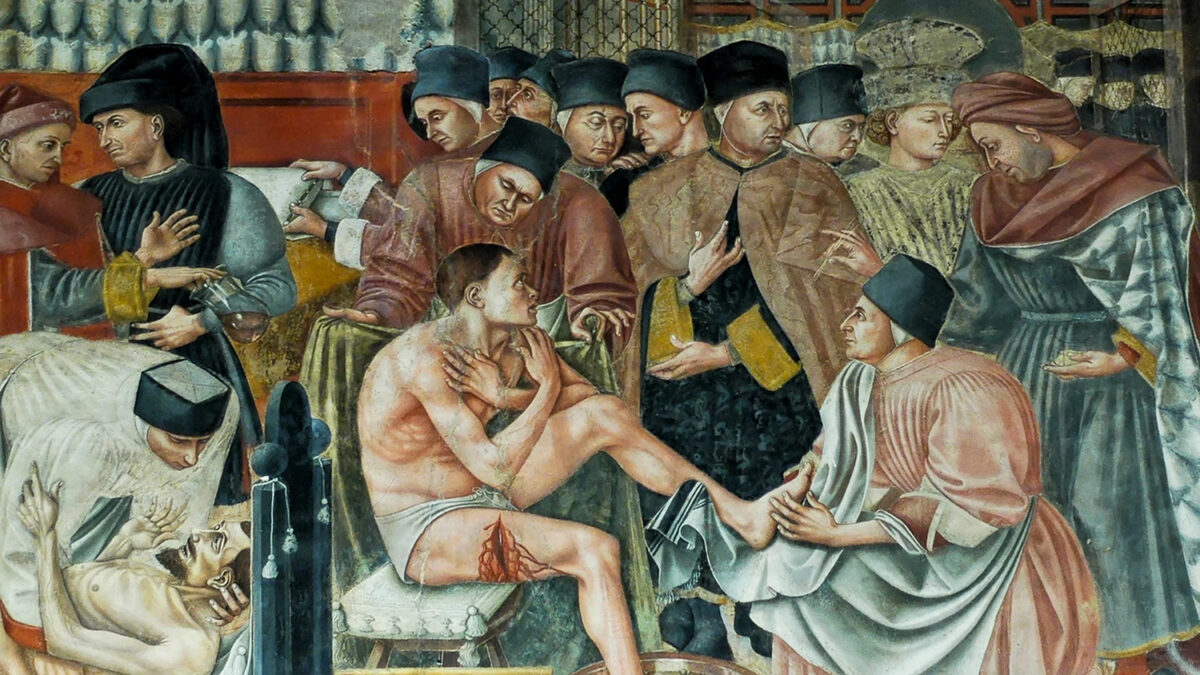 The Jerusalem Council in Acts 15:1-29 is a common battleground for Torahism. People who mistakenly believe that followers of Jesus are required to keep the Law of Moses today—and you may know them as Hebrew Roots or Torah-keeping Christians—have their work cut out for them when trying to defend against this passage. And I want to bring some new observations to the conversation. Specifically, we’re going to look at the four restrictions listed in verse 20 and again in 29. Did they come from the Torah? Why were they given? Are they commands or guidelines? Or maybe something else?

If you’re not familiar with the events of the Jerusalem Council recorded in Acts 15:1-29, it’s worth your time to take a few minutes and read it through. In this passage, some Jewish believers in Jesus were teaching that Gentile believers are required to be circumcised and keep the Law of Moses. This generated “no small dissension and debate” (15:2), so a church council was held in Jerusalem to discuss the issue. This Council happened somewhere around50 CE, and many key players were in attendance, including Paul, Peter, James, Barnabas, and the church elders. And in the end, they decided not to require Gentile followers of Jesus to be circumcised or keep the law of Moses. Instead, they gave the Gentile believers four restrictions. And the Council wrote a letter to the Gentile churches with their decision. The last few sentences of that letter read:

You’ll notice that the requirements the Council determined should be given to Gentile believers didn’t include a kosher diet, Saturday sabbath, keeping the feasts, circumcision, or any of the staples of Torahism (aka the Hebrew Roots Movement). None of those things were required. So how do those who have come to believe that all followers of Jesus are required to keep the Torah deal with this passage?

One of the more popular approaches for our Hebrew Roots friends is to claim that these are just a sort of “starter pack” of commandments given to help the Gentiles start to become Torah-observant. And over time, they would learn the rest of the commandments. My video Testing Hebrew Roots on the Four Restrictions examines this claim in depth, but here are the two primary reasons that interpretation doesn’t work.

First, the idea of starting with a few Torah commands and learning the rest later is foreign to this passage. The text says nothing about that. And that idea isn’t found in the rest of the Bible, either. And, if the intention was to start the Gentiles off with just a few easy-to-keep commands, it seems odd that Saturday sabbath and eating kosher were not included. These commands would be very simple for a Gentile to understand and apply. Second, the text specifically says that the Council decided “to lay on you no greater burden than these requirements.” No greater burden. This is not language that implies the Gentiles would later be expected to learn the rest of the Torah.

It’s interesting to note that a plain, open-minded reading of this passage defeats the theology of our Torah-keeping Christian friends, which is why their theories require importing ideas into this passage that aren’t actually found there. So what’s really going on with these four restrictions? Let’s take a closer look at verses 28-29, where those requirements are listed, and let me share four brief observations that may be helpful.

Verse 28 opens with the words, “it seemed good to the Holy Spirit and to us.” And I think we sometimes miss the importance of how this statement is worded: “It seemed good.” The Greek word is δοκέω (dokeō), which means “to think or suppose.” This isn’t the language we see in Scripture when commandments are given. We see You shall, or you shall not, or the Lord has said, or a new commandment I give to you. But this verse simply says, “it seemed good to us.”

The full letter to the Gentiles, recorded in verses 23-28, is written in this same, almost informal tone. It does not contain the language we read at Sinai and the giving of the Law. And it’s not the kind of language we see from Paul when he’s cracking down on a rebellious church, commanding them to get their act together. This letter reads more like a church council resolving an issue than a heavenly mandate: It seemed good to us. It reads more like, “Well, we’ve thought about it, and we all talked it through, and this is what we think seems good.” It is written in the language of advice or guidance, not law.

Verse 28 ends “…to lay on you no greater burden than these requirements.” This is a powerful statement against Hebrew Roots. It says This is it, Gentiles. We’re not asking you to do any more than this. The wording here echoes the sentiments Peter shared earlier in this chapter during the debate when he asked, “Why are you putting God to the test by placing a yoke on the neck of the disciples that neither our fathers nor we have been able to bear?” (v. 10). In other words, why would we require the Gentiles to keep the entire Torah when our own Jewish people haven’t been able to bear it? And as Peter had pointed out in verses 8-9, God had already given the Gentiles the Holy Spirit without requiring them to keep the law. And then James, the leader of the Jerusalem church, echoed this sentiment when he decided to write the letter, saying, “my judgment is that we should not trouble those of the Gentiles who turn to God” (v. 19). Not trouble the Gentiles. Again, this is not the language of law-giving. Our Holy God would never say I don’t want to trouble you with my commandments!

Verse 28 communicates guidance or counsel: we’re laying on you no greater burden than these four things. It doesn’t read like a command of partial law-keeping until the Gentiles can learn to keep the entire Torah. It doesn’t read like a statement of law at all. This is guidance from the church leaders who don’t want to trouble the Gentiles with a heavy burden. So they’re giving them nothing more than four requirements.

The four prohibitions are found in verse 20 and repeated in a different order in verse 29. The Gentile believers are told to abstain from…

Why these four requirements? I’ll be honest; I couldn’t work out the Scriptural significance of these four particular restrictions until I found an explanation hidden in a theology paper on a different subject. In a paper called the Septuagint and Apostolic Hermeneutics: Amos 9 in Acts 15 by professor W. Edward Glenny, I found the four restrictions in Acts 15 compellingly tied to Leviticus. I examined the verses Glenny cited in his comparison and found it a persuasive theory. It’s not an exact one-to-one match; some interpretation is involved, but his theological institution seems sound, so I wanted to share his thesis here. You’ll find it in his own words on pages 20-22 of his paper, but here is my summary of it.

Glenny points out that, in Leviticus chapters 17-18, the phrase “the stranger who sojourns among you” is used to refer to four prohibitions that applied to Gentiles living in ancient Israel. And these four prohibitions can be connected to the four restrictions given in Acts 15. It breaks down as follows

And then Glenny concludes,

Although Gentile Christians are not under the Law, the Jewish (OT) Scriptures still have authority. The decision that is made concerning Gentiles in Acts 15 is based finally on those Scriptures (15:21), which speak directly to the situation under consideration at the Council.Thus, the Scriptures of Israel are the authority for the decisions made at the Council, and the Decree of the Council is the application of the Law of Moses to Gentiles who have become the people of God in the midst of Israel.

I find this a pretty credible theory. Remember, it was the Pharisees who brought this debate to the Council. They argued that the Gentiles needed to be circumcised and keep the law of Moses—in essence, they needed to become Jews—to follow the Jewish Messiah.

So James and the Council referred to a situation in the Torah where Gentiles were living among the people of God, and God handed down rules for those Gentiles to avoid offending the Israelites they were living among. God didn’t command the sojourners (the Gentiles) to be circumcised, keep the weekly Sabbath, keep the feasts, or eat kosher. They didn’t have to become Israelites fully. But He gave them some prohibitions and essentially said, “If you avoid these things, you’re welcome to live here among My people in Israel.”

And that’s precisely what James and Council applied to their situation in the first century. They looked to the Torah as a precedent for their decision, which was a wise decision. This approach would have made the Pharisees, known as diligent studiers of the law, comfortable with the idea of the Gentile believers living among them. And at the same time, this approach also honored the Gospel. It acknowledged that both Jews and Gentiles were now part of God’s family and that the Torah customs had not been done away with or forbidden. They are permitted but not required of followers of Yeshua.

You will do well…

The letter ends with the words, “If you keep yourselves from these, you will do well. Farewell” (v. 29). Again, we don’t see the language of law-giving or weighty matters of obedience here. They didn’t say, “if you keep yourself from these four things, you will be saved,” or “you will be righteous,” or “you will avoid sin.” It simply says, “you will do well.” It’ll be good. You’ll be okay. This, again, harkens to the idea of the restrictions being offered in the spirit of unity and peace in the nascent Church. If you Gentiles keep these restrictions, you will avoid offending your new Jewish brothers and sisters in Christ. And as we all know, unity in the growing Church is a consistent theme taught throughout the New Testament. Let me close with one of the many verses that speak to this issue.

19 thoughts on “New Observations on Acts 15”