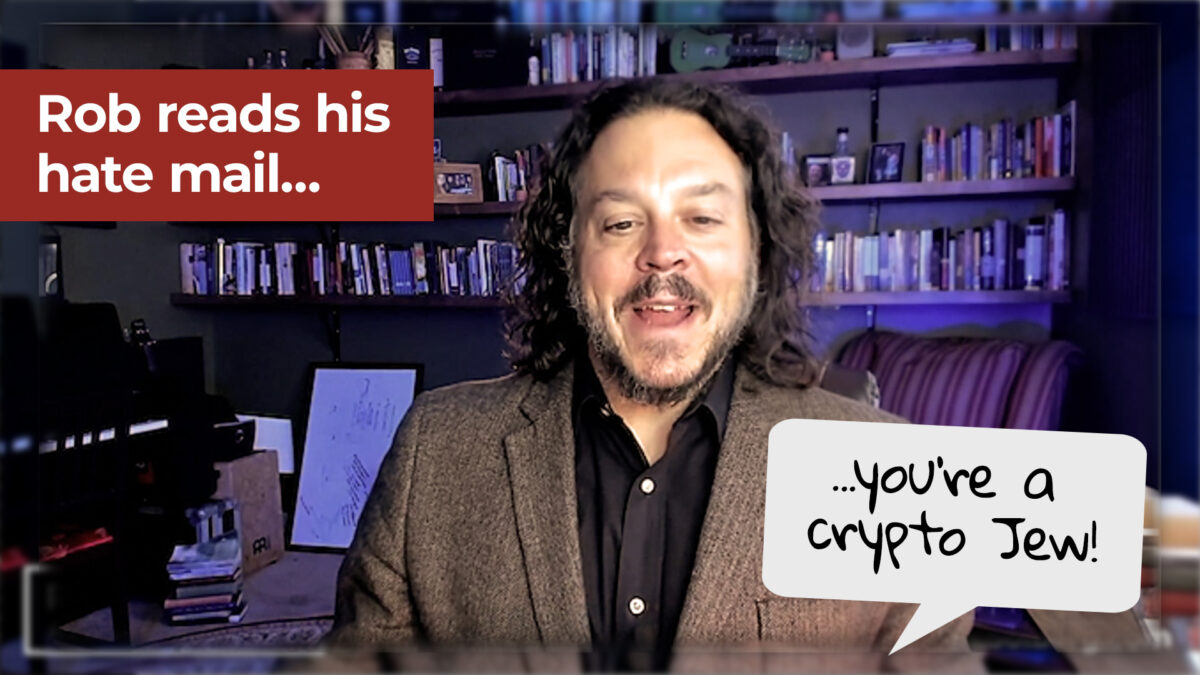 Ever since the video about my book Divergence came out, I have been on the receiving end of straight-up anti-Jewish racism. And here’s the kicker: I’m not even Jewish. So I put out a video in response in which I talk about what anti-Semitism really is, and why racism is un-Christlike. This is an important enough issue that I wanted to offer the transcript of the video here on my blog.

I wanted to make this video to discuss two things. First, is the anti-Semitism that I am personally experiencing. I’m going to read you some of my hate mail and clear up a couple misconceptions I keep seeing. Second, we need to have a talk about what antisemitism really is. This term can get tossed around so loosely that it loses all meaning. So we’ll look at that, too.

A few days ago, a short promo video was released for my new book and I want you to see some of the nasty comments I’ve been getting on it. And mind you, this is just a 90-second teaser video about the book. These aren’t comments from people who have actually read the book and understand where I’m coming from. They’re merely reacting to the headline “Christian author pledges 100% of book profits to fight anti-Semitism.” That’s it. Here are some of the comments:

I get that a lot actually. Many people assume I am Jewish and that my last name, Solberg is Jewish. So let me set the record straight. I am not Jewish. God made me a Gentile. And, “Solberg” is not a Jewish name, it’s Norwegian. It means something like “sun hill” or “sun mountain.”

Solberg is the surname name I proudly accepted at the age of ten when my step-father officially adopted me. For the first ten years of my life my name was Dorian Robert Boyle II. I was born into a Black Irish family, the Boyles. And when my step-dad adopted me, I chose to change my name to Robert Luke Solberg.

So I’m not Jewish. If you want to get technical, I’m an English-French-German-Norwegian-Swedish-Irish-Scottish-Slavic-Russian American. And I’d appreciate it if you’d address me as such!

I typically delete these kinds of comments of mindless hatred and name-calling. They don’t move the conversation forward. However, in this case, I’m leaving them up because they prove the need for my new book. They validate:

These nasty comments make me doubly glad I am donating the profits from the book to fight anti-Semitism. Because, for the life of me, I do not see any possible way to reconcile the teachings of Jesus and the NT with a hatred for the Jewish people. It just doesn’t add up.

Racism is real and it’s a terrible thing. But here’s the problem: the world has begun to throw around terms like racism and anti-Semitism so often and so loosely that they lose their meaning. So I want to take a minute to address that. Anti-Semitism is defined as, “hostility toward or discrimination against Jews as a religious, ethnic, or racial group.”

We have to remember what racism really is, otherwise, we water down how wrong it is. It’s easy to know what real racism is. It’s in the name itself: RACE-ism. If the motivation for the hatred, or discrimination, or oppression of someone is based on their RACE, it’s racism. On the other hand, if you have a disagreement or dislike someone for reasons other than their race, it is NOT racism.

If you argue with the cashier at the store because you think they gave you the wrong amount of change, and they happen to be a different race than you, that’s not racism. Likewise, with the Jewish people. If we happen to disagree with a political position taken by the Israeli government because we think it’s bad policy, that’s not anti-Semitism. Or if we disagree with a person about who Jesus is, and that person happens to be Jewish, that’s not racism, it’s theology.

However, if we oppose the government of Israel because we want to discriminate against the Jewish people, or if we hate people because they are Jewish, that’s anti-Semitism. It’s anti-Jewish racism. And it’s wrong.

It’s negatively judging someone based on something God gave them: their ethnicity. No one gets to choose what color their skin will be. God is the one who decided that some of us would be Jewish, some would be Gentiles, some would be Arabs, black, white, middle eastern, Asian. Whatever ethnicity we are, God chose that for us. And He doesn’t make mistakes. God so loved the multi-colored, multi-ethic world, that He gave his only Son, that whoever—of any color or ethnicity, Jew or Gentile—whoever believes in him should not perish but have eternal life.

In my opinion, it’s not even so much about race. What we’re really dealing with here is other-ism. Racism is just the ethnic branch of otherism.

Humanity is a fallen race, the Bible tells us this. We fallen humans have the inherent tendency to look negatively on any kind of other. We dislike people who belong to the other political party, the other gender, the other religion, the other social class, the other sexual orientation. Even the other football team.

This is why the message of Jesus is so earth-shattering. It’s no accident that the New Testament repeatedly teaches us to “love one another.” Look at all these verses.

Ideas are not made in the image of God, people are. So it’s okay to hate the idea of racism, or oppression. It’s not okay to hate our neighbor. That is the opposite of what Jesus taught. Jesus us calls us to a higher kind of love.

I’m going to wrap up by reading this short excerpt from the Sermon on the Mount in Luke 6, and think about the posture of humility and love that Jesus is calling us to regarding our neighbor, our fellow human beings, regardless of their race or ethnicity:

But I say to you who hear, Love your enemies, do good to those who hate you, bless those who curse you, pray for those who abuse you. To one who strikes you on the cheek, offer the other also, and from one who takes away your cloak do not withhold your tunic either. Give to everyone who begs from you, and from one who takes away your goods do not demand them back. And as you wish that others would do to you, do so to them.

How can we read that, and then turn around and unmercifully castigate a human being because God happened to make him or her Jewish? Or Palestinian? Or black? Or a white? Or whatever other they might be.

In John 13 Jesus says that the world will know we are His disciples by our love for one another. So, let’s love one another. Shalom!

Previous Post
The New Book!
Next Post
Can the Bible Be Our Authority and Not Be Inerrant?

2 thoughts on “A non-Jew experiences anti-Semitism”