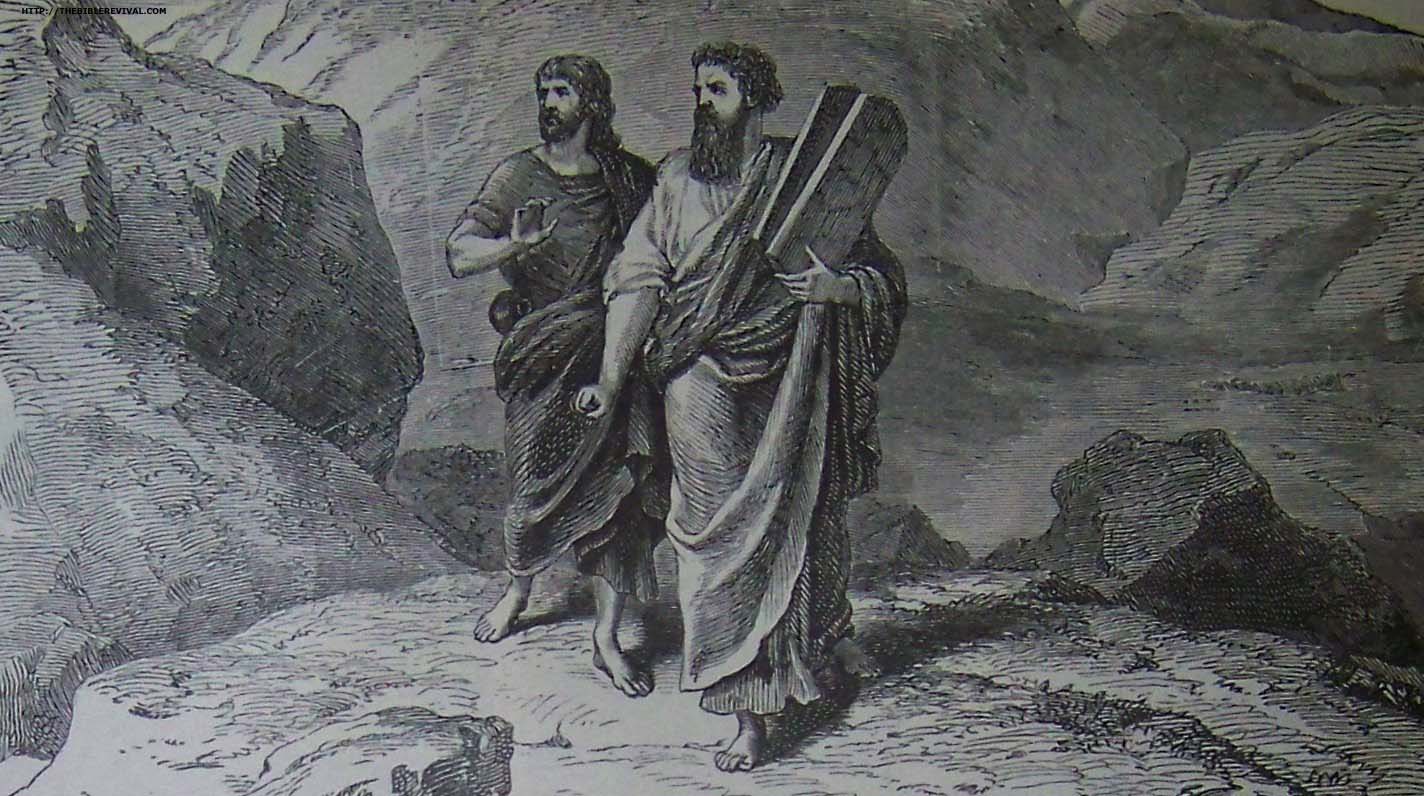 Is the Law of Moses Eternal?

When God entered into a covenant with Israel at Mount Sinai, was that covenant expected to be eternal? The Law of Moses served as the terms of that covenant. If Israel kept the 613 mitzvot (commandments) of the Law of Moses, the nation would be blessed. If not, the covenant would be broken and Israel would be cursed (See: Deut 28-29). So was the Law of Moses intended to remain binding and unchanged forever? According to both Judaism and the modern movement called Torahism, the answer is a resounding yes! But is that what the Bible really teaches? Let’s take a look.

Before the mountains were born
or you brought forth the whole world,
from everlasting to everlasting, you are God.

By definition, this tells us that the Sinai Covenant, although it was given by an eternal God, is not eternal. Why? Because, unlike God, it had a beginning. Noted Jewish Rabbi Adin Even-Israel teaches that the covenant was not given to mankind until Mount Sinai, and the apostle Paul agrees (Rom 5:13-14).

God created the universe and humanity, including a host of Old Testament saints—Adam, Noah, Abraham, Isaac, Jacob, Job, Joseph, etc.—who all lived and died before He gave Israel the Law of Moses. The world saw the Fall and the Flood and the tower of Babel before the Law existed. The Jews spent centuries in slavery in Egypt before the Law of Moses was born. Clearly, the Law of Moses is not eternal. It was given at a specific time in history (~1400 B.C.) through a particular man (Moses).

Okay, so maybe the Law of Moses is not technically eternal because it had a beginning. But once given, was it intended to remain binding and unchanged forever? Our Jewish and Torahist friends say yes and cite several passages to support that claim:

The emphasis in the verses above is mine. I added it to underscore that there seems to be a very strong case for the everlasting nature of the Law of Moses. But are the original Hebrew phrases behind the verses above intended to literally mean “without end, to be continued infinitely?” This is where things get interesting.

What’s In a Word?

To understand what the Bible means by everlasting, we need to remember that almost all of the Old Testament was written in biblical Hebrew,3 which is an archaic form of the Hebrew language. When translating any text, there is not an exact one-to-one correlation between languages. This is especially true when translating biblical Hebrew—which has less than 9,000 words—into modern English, which has more than 200,000 words!

Our goal should be first to interpret any passage of Scripture within the context of the book in which it was written, and then within the context of the entire Bible. In most cases, the English translations give us what we need. But when it comes to examining the claims of Judaism or Torahism, it is sometimes necessary for us to parse the English translations a bit more carefully. For example, consider the following verse:

So the sons of Israel shall observe the sabbath, to celebrate the sabbath throughout their generations as a perpetual covenant.

In this verse, the Hebrew word עוֹלָם (`olam) is translated as the English word perpetual. In English, this word means “continuing forever; everlasting, valid for all time.”4 In ancient Hebrew, however, the word olam is not so cut-and-dry. It has a much broader definition. According to The NAS Old Testament Hebrew Lexicon, that single word can mean:

This wide range of possible meaning explains why, in the New American Standard Bible translation, the Hebrew word olam is rendered 435 times as 25 different English words or phrases:5

This range of meaning raises an important question. In the verse quoted from Exodus above, how do we know if the phrase perpetual covenant was intended to mean a covenant that is valid “for all time” or “for a long, indefinite duration” or something else? When it comes to Scripture—especially the writings in biblical Hebrew—a word’s intended meaning must be drawn from the context of its use. We need to view it in light of the larger body of teaching in the passage, the book, from that author, and ultimately from the entire Bible.

The passage we’re looking at says, “So the sons of Israel shall observe the sabbath, to celebrate the sabbath throughout their generations as a perpetual covenant” (Ex 31:16, NASB). In Judaism, the context for determining the meaning of this verse is limited to the Old Testament. Christians and Torahists, on the other hand, accept the New Testament as the Word of God, so they have a larger context to consider. They must determine the meaning of the word within the context of both the Old and New Testaments. This makes a big difference. God has sovereignly chosen to reveal His will to mankind over time, rather than all at once. So when new information is introduced along the biblical timeline, we have to interpret the former Scriptures in light of the latter. They are both the inspired Word of God, of course. But often the newer information helps to explain or illuminate the older.

It’s like the movie The Sixth Sense. Near the end of the film, we get the shocking revelation that the psychiatrist Malcolm has been dead the whole time. If we were to go back and re-watch the movie, we would discover that the revelation at the end does not change the content or meaning of the earlier scenes. In a sense, it makes them even more true. We would notice the clues the filmmaker added, which were sitting in plain sight the whole time. We would realize that Malcolm’s wife wasn’t just ignoring him or being cold, she was acting like he didn’t exist because he was dead and she couldn’t see him. And we would notice that Malcolm never touches or moves objects in front of anyone other than the young boy, Cole, who can see dead people. And that Malcolm never directly interacts with the boy’s mother. These clues were there for us all along, but it’s not until we receive the revelation later in the film that we fully understand what they mean.

The same thing is true of the Bible. Once we become aware of the new revelations that God gave us through Yeshua and the authors of the New Testament, it puts the Tanakh (aka Hebrew Bible or Old Testament) into sharper focus. In a sense, it makes the Hebrew scriptures even more true. Now when we go back and re-read the Old Testament, we discover clues the Author added which were sitting in plain sight the whole time. The Old Testament wasn’t wrong, and it’s certainly not to be thrown away. Because of future revelations from God, however, it means something more than we thought. And by understanding the Hebrew Bible more fully, it becomes even more real and amazing.

Looking at the text in Exodus 31:16, we can see why, at the time it was given, the early Jews concluded the phrase “a perpetual covenant” meant that the covenant would last literally until the end of time. At that time, Israel had no idea there was going to be a New Covenant. That wouldn’t be revealed until the prophet Jeremiah. The Jewish authors of the New Testament, on the other hand, had the benefit of reading that passage in light of the new information later revealed by Yeshua. They realized that God’s promised New Covenant (Jer 31:31-34) was inaugurated in the first century through Christ’s death on the cross (Matt 26:28; Luke 22:20; 1 Cor 11:25). And further, they recognized that the Sinai Covenant—which was described as ovlam berit (a perpetual covenant) in the Torah—had been become obsolete and outdated at Christ’s resurrection (Heb 8:13). In light of this newer information, we are forced to conclude that the Hebrew phrase ovlam berit (perpetual covenant) in Exodus 31:16 could not have meant “until the end of time.” If that was the case, Scripture would be contradicting itself. It must have instead meant something like a long, indefinite duration.

We find this same thing with the establishment of the “permanent” or “everlasting” Levitical priesthood in Exodus 40:15. This is translated in the King James Version as, “…an everlasting priesthood throughout their generations.” Here, the Hebrew word `olam is translated into the English word everlasting. And if the word everlasting in this passage literally meant “forever,” then the priesthood prescribed by the Law of Moses—which was strictly limited to descendants of the tribe of Levi5—would be the only priesthood until the end of time. However, in the New Testament, we find that Yeshua, Who descended from the tribe of Judah, not Levi, is now our High Priest (Heb 7:14-18). And what’s more, all Christians, whether Jew or Gentile, are now a royal priesthood through the indwelling of the Holy Spirit (1 Peter 2:4-10). So when the Law of Moses described the Levitical priesthood as “everlasting,” it could not have meant it would literally last until the end of time. Instead, it must have meant that the priesthood was to last for something like a long, indefinite duration.6

There are numerous examples like this throughout Scripture where English words and phrases like forever, eternally, throughout your generations, unto a thousand generations, and as long as you’re living on the earth could not actually mean “until the end of time.”7 However, here’s where it gets tricky: there are also many passages where that’s exactly what those words mean. For example, God and His attributes are eternal,8 His Word will endure forever,9 and His love is literally unending.10

This is why context is so important. We need to be careful in our interpretation of any given verse or passage. When earlier verses seem to imply something will last forever and later verses indicate that thing has ended, it should give us pause. To accurately reconcile seemingly contradictory passages, we need to view what we’re reading in light of the entire Bible. This is why I mentioned that the early Jews were operating within a smaller Scriptural context. It was not a wrong context, just incomplete.

Our Torahist friends find themselves in the untenable position of accepting the new information found in the New Testament, yet restricting the interpretation of that information to the context of the Hebrew Bible. In the end, the interpretation of the Law of Moses as eternal and everlasting does not align with Scripture as a whole. And this is where we bump into the thorny issue of terminology. Is God’s Word eternal? Yes. Is His perfect law eternal? Of course! Are His promises eternal? Absolutely. But as I unpack further in my book Torahism: Are Christians Required to keep the Law of Moses?, the Mosaic Law was never intended to last forever.

[3] According to the International Bible Society, a few chapters of Ezra and Daniel and one verse in Jeremiah were written in biblical Aramaic, rather than Hebrew.

[5] See Exodus 40:15 and Deuteronomy 18:5. The fact that the Levitical priesthood has now ended is one of many clues that tell us the Law of Moses is no longer active and binding. This issue is discussed in greater detail in my book Torahism: Are Christians Required to keep the Law of Moses? See chapter 12: The Temple: Priests, Sacrifices & Worship.

[6] This is evident in the way the word ‘ovlam is rendered in other Bible translations. For example, in the NIV, the English word “everlasting” is not used in this verse at all. Instead, it refers to “a priesthood that will continue throughout their generations.”

5 thoughts on “Is the Law of Moses Eternal?”