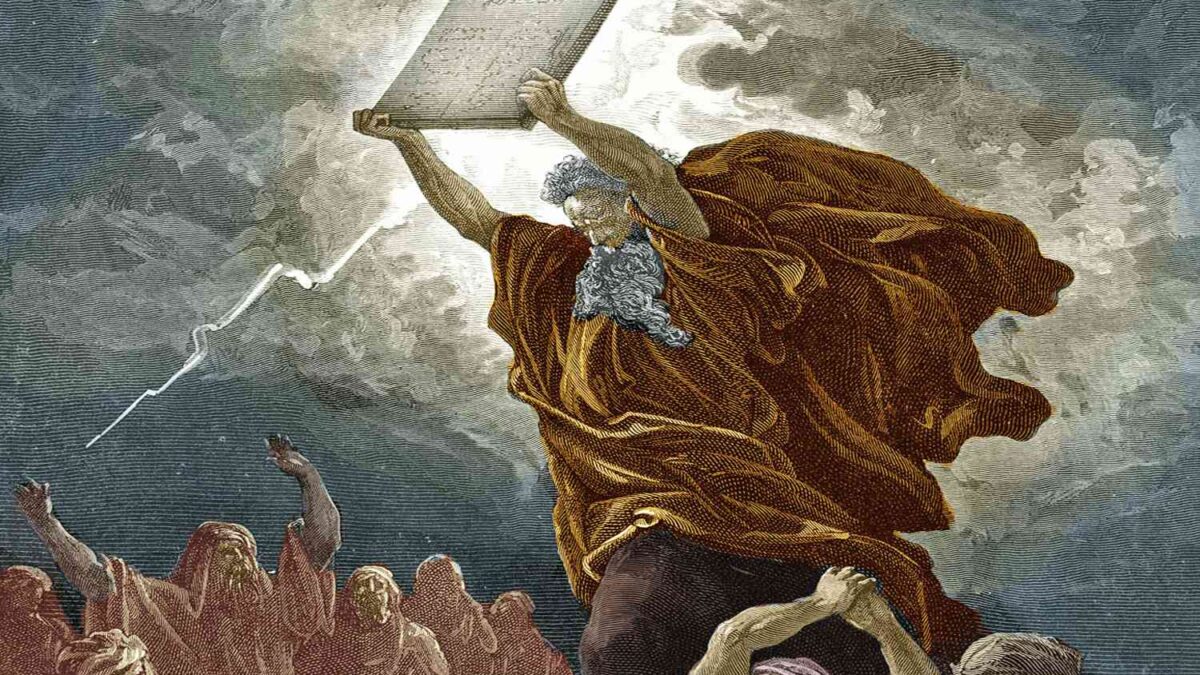 The End of the Law of Moses

A Bible Study on 2 Corinthians 3

The theology of Torahism (you may know it as Hebrew Roots or Torah-observant Christianity) teaches that followers of Jesus are required to keep the Law of Moses. And in this article, we’re going to examine Scriptural evidence that shows just the opposite. There are various texts in the New Testament we could go to, but today we’re going to break down a lesser-known passage in 2 Corinthians 3 that doesn’t even use the word “law.” And we’ll see that it shows how the Law of Moses has ended, and therefore, Torahism is a false theology.

And let me clear up something right off the bat. When I refer to the “Law of Moses,” I’m talking about the set of commands that God gave to the nation of Israel through Moses at Mount Sinai. This is what the Bible refers to as the Law of Moses. And as I’m going to demonstrate from Scripture, the Mosaic Law, with its ceremonial commands for feasts, kosher food, Saturday Sabbath, and circumcision, does not apply to Christians under the New Covenant. Our friends in the Hebrew Roots Movement completely reject this idea, of course. They challenge it by saying, “Where does it say that? Show me where the Bible says that the law of Moses has ended!” Okay. Let’s do that.

Second Corinthians 3 discusses how Christians are ministers of the New Covenant. And there’s a short passage in this chapter that presents an insurmountable challenge to Hebrew Roots theology.

There you have it. This passage teaches that the Law of Moses has ended. Not convinced? Okay, let’s break it down.

And he gave to Moses, when he had finished speaking with him on Mount Sinai, the two tablets of the testimony, tablets of stone, written with the finger of God.

The giving of the law at Mount Sinai was the central event in the history of the nation of Israel. And the book of Exodus reveals that God’s finger carved the letters of the law on stone tablets. So the phrase “carved in letters on stone” in 2 Cor 3:7 is a clear reference to the Law of Moses, a law which Paul here labels “the ministry of death.” Those are strong words. But he did not mean that the Mosaic law literally kills us. Paul is referring to the fact that the law can’t save us; it is not a means to salvation but reveals our sins (Rom 3:20, 7:7-25, 8:2), and the wages of those sins, of course, is death (Rom 6:23).

Together verses 7-8 are a complete thought in which Paul contrasts the glory of the Mosaic law, written on stone by the finger of God, with “the ministry of the Spirit.”

Now if the ministry of death, carved in letters on stone, (in other words “If the Law of Moses…”) came with such glory that the Israelites could not gaze at Moses’ face because of its glory, which was being brought to an end, will not the ministry of the Spirit have even more glory?

There are two things to point out here. First, although the Mosaic law is called a “ministry of death” in this passage, it was attended by the glory of the Living God. So it cannot be dismissed as some ancient, pointless code. Romans 7:12 says, “So then, the law is holy, and the commandment is holy and just and good.” (Notice this statement is written in the present tense.) And the text in Romans 7 then goes on to describe the purpose of the law under the New Covenant, which is to reveal our sins and point us to Jesus. So the phrase “ministry of death” does not imply that the law can be dismissed altogether. Rather, it highlights that the Law of Moses was never intended to provide salvation. And in this text in 2 Cor 3, Paul is also teaching that the Mosaic law never intended to last forever.

The Ministry of the Spirit

The Apostle Paul commonly uses the terminology of “the Spirit” when contrasting Jesus and the New Covenant with Moses and the Sinia Covenant. Let’s look at a few examples.

Romans 2:29 says, “… circumcision is circumcision of the heart, by the Spirit, not by the written code.” Here Paul contrasts the Spirit with the “written code,” another reference to the Mosaic law. We find the same contrast in Romans 7:6, “…we serve in the new way of the Spirit, and not in the old way of the written code.” And Romans 8:2 says, “through Christ Jesus, the law of the Spirit who gives life has set you free from the law of sin and death.” Here’s a contrast between what Paul calls the “law of the Spirit” and “the law of sin and death,” an echo of 2 Cor 3:7, where he calls the Mosaic law the “ministry of death.” And in Galatians 5:18, Paul clearly contrasts the Spirit and the law: “But if you are led by the Spirit, you are not under the law.”

Here is one last example. A few verses before our passage in 2 Cor 3, Paul tells the church at Corinth, “You show that you are a letter from Christ, the result of our ministry, written not with ink but with the Spirit of the living God, not on tablets of stone but on tablets of human hearts.” This is another contrast between tablets of stone, a reference to the law of Moses, and what Paul calls “tablets of human hearts,” a reference to the New Covenant in which God promised to write His law on our hearts (Jer 31:31-34; Heb 8:8-12). Paul then carries this theme into verses 7-8, where he applies that same idea of contrasting Jesus and the New Covenant with Moses and the Old Covenant. He asks, if the Law of Moses came with great glory, how much more glory does the ministry of Christ have?

Paul includes a significant point in verse 7 that we don’t want to miss. He refers to the glory on Moses’ face as “being brought to an end.” Scripture doesn’t say how long Moses had to wear the veil, but after the giving of the law, it’s never mentioned again. And here in 2 Corinthians, Paul is pointing out that, at some point, the reflection of God’s radiant glory on Moses’ face came to an end. And he’s linking that idea to the temporary nature of the Mosaic law. In other words, when God gave the law to Moses, it was accompanied by God’s glory. And just like the radiant glow on Moses’ face eventually ended, so would the law that came with it. So while the Law of Moses was holy and righteous and good, it was also temporary, just like the glow on Moses’ face.

And for good measure, Paul doubles down on this contrast in the last two verses of our passage.

Indeed, in this case, what once had glory (referring to the glory of the law that caused Moses’ face to glow), has come to have no glory at all, because of the glory that surpasses it (the ministry of Jesus). For if what was being brought to an end (another reference to the Law of Moses, which came to an end, just like the glow on Moses’ face) came with glory, much more will what is permanent (the ministry of Christ) have glory.

In Hebrew literature, when an author wants to emphasize a point, they use repetition. We see this throughout the Old Testament, and Paul uses it in 2 Cor 3 in spades. He’s emphasizing that the ministry of Jesus is superior to and far more glorious than the Law of Moses. In our short, 5-verse passage, Paul repeats the same idea four times!

Paul is a lot of things, but subtle is not one of them. His message comes through loud and clear in this passage. And he echoes what the author of Hebrews taught:

But as it is, Christ has obtained a ministry that is as much more excellent than the old (referring to the Levitical priests under the Mosaic Law) as the covenant he mediates is better, since it is enacted on better promises.

Said another way, the ministry and covenant Yahweh established through Moses are inferior to the ministry and the covenant He established through Jesus. And the author of Hebrews ends chapter 8 with this statement, “In speaking of a new covenant, he makes the first one (the Mosaic covenant) obsolete. And what is becoming obsolete and growing old is ready to vanish away.” (Heb 8:13, comment added). And just a few years after these words were written, the temple in Jerusalem was destroyed, and the Old Covenant and its law became obsolete and vanished away.

The text of 2 Cor 3:7-11 teaches that the Law of Moses has been outshined and, like the glow on Moses’ face, has come to an end. Not because it was bad or wrong. It was intended from the beginning to be temporary. And the Mosaic law is inferior to the exceedingly glorious and far superior law of Christ (1 Cor 9:21).

Allow me to wrap up by humbly offering my own paraphrase of what I believe our passage teaches.

If the Law of Moses came with such glory that the Israelites could not gaze at Moses’ face because of it, how much more glory does the ministry of Christ have? There was glory in the Law, but the righteousness of Jesus far exceeds it. In fact, the Law, which enjoyed temporary glory, has ended. It has been surpassed by the glory of Christ, which will never end!

22 thoughts on “The End of the Law of Moses”